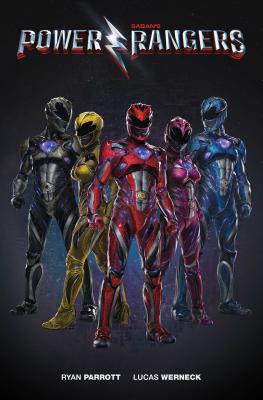 By Ryan Parrott, Lucas Werneck (Illustrator)
Email or call for price and availability
Hard to Find

This is book number 1 in the Mighty Morphin Power Rangers series.

The authorized graphic novel sequel to Saban’s Power Rangers, the 2017 film that reboots the classic TV series for the modern age.

Based on the world wide phenomenon, the Rangers have returned to the big screen like never before and this authorized original graphic novel serves as a direct follow up to the blockbuster film.

Written by Ryan Parrott (Star Trek: Manifest Destiny) and illustrated by rising talent Lucas Werneck, the Power Rangers face off against an all new threat to the city of Angel Grove.

Ryan Parrott was born in Bakersfield, California but spent they majority of his life growing up in Las Vegas. A graduate of Chapman University, Ryan had short films screen at both the Sundance and Cannes Film Festivals — eventually leading to a career in film and television. He has written for the NBC television series “Revolution”, IDW’s Star Trek and Star Trek: Starfleet Academy as well as co-writing the series’ finale “Revolution: Endgame” and the New York Time’s best-seller “Batman: Gates of Gotham.”

This feature require that you enable JavaScript in your browser.
END_OF_DOCUMENT_TOKEN_TO_BE_REPLACED

This feature require that you enable JavaScript in your browser.
END_OF_DOCUMENT_TOKEN_TO_BE_REPLACED

This feature require that you enable JavaScript in your browser.
END_OF_DOCUMENT_TOKEN_TO_BE_REPLACED