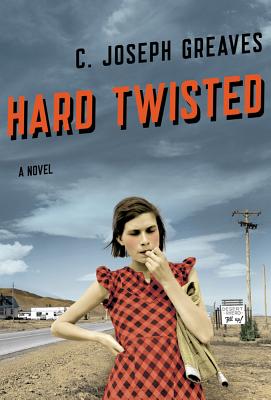 By C. Joseph Greaves
Email or call for price and availability
Special Order

In May of 1934, outside of Hugo, Oklahoma, a homeless man and his thirteen-year-old daughter are befriended by a charismatic drifter, newly released from the federal penitentiary in Leavenworth, Kansas. The drifter, Clint Palmer, lures father and daughter to Texas, where the father, Dillard Garrett, mysteriously disappears, and where his daughter Lucile begins a one-year ordeal as Palmer's captive on a crime spree-culminating in the notorious Greenville, Texas "skeleton murder" trial of 1935.

C. Joseph Greaves weaves a chilling tale of survival and redemption, encompassing iconic landscapes, historic figures, America's last Indian uprising, and one of the most celebrated criminal trials of the Public Enemy era, all rooted in the intensely personal story of a young girl's coming of age in a world as cruel as it is beautiful.

C. Joseph Greaves is a former L.A. trial lawyer now based in Colorado. His discovery of two human skulls in a remote Utah canyon would lead, eighteen years later, to the completion of Hard Twisted, named Best Historical Novel of 2010 in the SouthWest Writers international writing contest, in which Greaves was also honored with the grand-prize Storyteller Award. Greaves is also writing an L.A.-based mystery series; the first installment, Hush Money, will be published by Minotaur in Spring 2012.

“[A] compelling novel…Readers can't help but open their hearts to Lottie. …Her story with all its gritty details and twists deserves wide readership.” —Library Journal, starred review

“Impressive…a strong literary voice who can render period with authority and violence without sensationalism.” —Publishers Weekly

“A superb first novel, based on a true story . . . Extraordinarily moving reading.” —The Guardian

“A masterful literary fiction debut based on the true story of Lucile Garrett... Greaves' understated writing captures the dry, raw-boned beauty of the land and reproduces the distinctive dialect of that time and place with a pitch-perfect ear . . . Comparisons to Cormac McCarthy, another writer of unflinching Western stories, feel apt. In its historical weight and narrative power, Hard Twisted is as epic as the rugged mesas and range its characters inhabit.” —High Country News

“Greaves is the sort of formidable storyteller and mean prose-stylist that makes it look easy. With all the grit, suspense, pathos, and thrills you could ever ask for in a crime novel, Hard Twisted will leave you in knots.” —Jonathan Evison, author of West of Here and The Revised Fundamentals of Caregiving

“Standing shoulder-to-shoulder with Mailer, Capote and Berendt, Greaves has crafted a McCarthy-esque non-fiction novelisation that is, at once, both timeless and classic. A truly extraordinary accomplishment, and a wonderful, wonderful book. I was left speechless.” —RJ Ellory, author of A Quiet Belief in Angels

“Hard Twisted reads like the perfect amalgam of Cormac McCarthy and Jim Thompson: violent, hilarious, and as bracing and painful as the blow of a dog quirt across the face. Utterly irresistible.” —Pinckney Benedict, Author of Dogs of God, The Wrecking Yard, Town Smokes, and Miracle Boy and Other Stories

“Hard Twisted is fictional crime, with an exceptional true story as its spine, written in a superbly innovative way. Greaves has penned a remarkably fine novel in prose as stylish and engaging as one will find among the most popular authors in this genre. This compelling saga of murder, mystery, and good and evil at its rawest in the hardscrabble rural Southwest of the 1930s should capture and fascinate a wide readership.” —Vincent Bugliosi, New York Times-bestselling author of Helter Skelter

“Lottie's narration, a mix of naïvete and hard-won toughness, is heartbreaking in its plainspoken recounting of the facts behind a nightmare, but all the characters, even Palmer--a sociopath to his core--reveal flickerings of inner lives that confound our attempts to pigeonhole this seemingly archetypal Depression tragedy. ” —Booklist

“The true events behind the John's Canyon Murder and the subsequent "skeleton murder trial" of the Depression Era are brought to spellbinding light in Hard Twisted, set in a landscape as brutal as it is beautiful.” —TheBigThrill

“The fact that this is based on a true story adds to its chilling suspense. Greaves impressively brings alive Lottie's year with Palmer; it felt as real to me as my own childhood…. Hard Twisted grabbed me and didn't let go. It feels like a classic because of Greaves's stylish writing, because of the story's drama, and because of the powerful theme--how Lottie's believable, determined innocence and faith kept her whole. Although Hard Twisted will never be shelved with inspirational books, it inspired me. It's a real-life morality tale, no preaching needed. Recommended.” —HistoricalNovelSociety

This feature require that you enable JavaScript in your browser.
END_OF_DOCUMENT_TOKEN_TO_BE_REPLACED

This feature require that you enable JavaScript in your browser.
END_OF_DOCUMENT_TOKEN_TO_BE_REPLACED

This feature require that you enable JavaScript in your browser.
END_OF_DOCUMENT_TOKEN_TO_BE_REPLACED