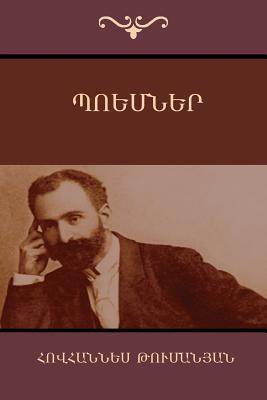 By Hovhannes Tumanyan
Email or call for price and availability

Hovhannes Tumanyan (February 19, 1869 - March 23, 1923), is considered to be one of the greatest Armenian poets and writers. His work was mostly written in tragic, sometimes humorous form, as in this title, often centering on the harsh lives of villagers in the Lori region. Tumanyan's inspiration for his writing came considerably from his parents. He was born in the village of Dsegh in the Province of Lori, Armenia. With his father was an offspring of an Armenian princely family of Tumanian (branch of the Mamikonians) and the village's priest and his mother an avid storyteller with a particular interest in fables, Tumanyan had incorporated many of the themes from his mother's stories and his father's preachings into his writings. Tumanyan is usually regarded in Armenian circles as "All-Armenian poet". He earned this title when the Catholicos of Armenia had ordered that Armenian refugees from the west not enter certain areas of his church and house, since he is considered to be "The Catholicos of all Armenians". Tumanyan in response decried that decision claiming that the refugees could seek relief in the Catholicos' quarters under order of "The Poet of all Armenians".

This feature require that you enable JavaScript in your browser.
END_OF_DOCUMENT_TOKEN_TO_BE_REPLACED

This feature require that you enable JavaScript in your browser.
END_OF_DOCUMENT_TOKEN_TO_BE_REPLACED

This feature require that you enable JavaScript in your browser.
END_OF_DOCUMENT_TOKEN_TO_BE_REPLACED