Children of the Days: A Calendar of Human History (Hardcover) 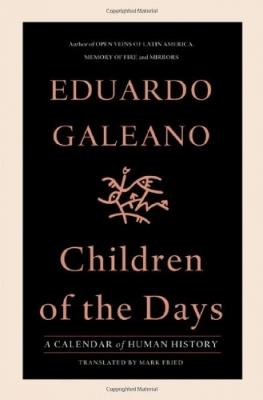 Unfurling like a medieval book of days, each page of Eduardo Galeano's Children of the Days has an illuminating story that takes inspiration from that date of the calendar year, resurrecting the heroes and heroines who have fallen off the historical map, but whose lives remind us of our darkest hours and sweetest victories.
Challenging readers to consider the human condition and our own choices, Galeano elevates the little-known heroes of our world and decries the destruction of the intellectual, linguistic, and emotional treasures that we have all but forgotten.
Readers will discover many inspiring narratives in this collection of vignettes: the Brazilians who held a "smooch-in" to protest against a dictatorship for banning kisses that "undermined public morals;" the astonishing day Mexico invaded the United States; and the "sacrilegious" women who had the effrontery to marry each other in a church in the Galician city of A Coruna in 1901. Galeano also highlights individuals such as Pedro Fernandes Sardinha, the first bishop of Brazil, who was eaten by Caete Indians off the coast of Alagoas, as well as Abdul Kassem Ismael, the grand vizier of Persia, who kept books safe from war by creating a walking library of 117,000 tomes aboard four hundred camels, forming a mile-long caravan.
Beautifully translated by Galeano's longtime collaborator, Mark Fried, Children of the Days is a majestic humanist treasure that shows us how to live and how to remember. It awakens the best in us.

Eduardo Galeano (1940-2015) was one of Latin America's most distinguished writers. A Uruguayan journalist, writer and novelist, he was considered, among other things, "a literary giant of the Latin American left" and "global soccer's pre-eminent man of letters." He is the author of the three-volume Memory of Fire; Open Veins of Latin America; Soccer in Sun and Shadow; The Book of Embraces; Walking Words; Upside Down; and Voices in Time. Born in Montevideo in 1940, he lived in exile in Argentina and Spain for years before returning to Uruguay. His work has been translated into twenty-eight languages. He is recipient of many international prizes, including the first Lannan Prize for Cultural Freedom, the Casa de las Americas Prize, and the First Distinguished Citizen of the region by the countries of Mercosur. Galeano once described himself as "a writer obsessed with remembering, with remembering the past of America and above all that of Latin America, intimate land condemned to amnesia." Isabel Allende, who said her copy of Galeano's book was one of the few items with which she fled Chile in 1973 after the military coup of Augusto Pinochet, called Open Veins of Latin America "a mixture of meticulous detail, political conviction, poetic flair, and good storytelling."

This feature require that you enable JavaScript in your browser.
END_OF_DOCUMENT_TOKEN_TO_BE_REPLACED

This feature require that you enable JavaScript in your browser.
END_OF_DOCUMENT_TOKEN_TO_BE_REPLACED

This feature require that you enable JavaScript in your browser.
END_OF_DOCUMENT_TOKEN_TO_BE_REPLACED