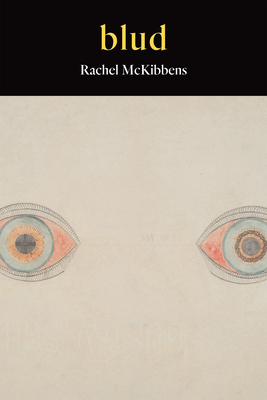 Chicana poet, activist, and witchy folk hero of the disenfranchised. . . . McKibbens] creates these spaces of witness with her feral and boundary-pushing poems that speak unflinchingly of topics often swept under the rug: rape, domestic violence, body shaming, mental illness, prejudice.--Ploughshares

McKibbens, a pioneer in the art of performance poetry, presents her audience with] selfless honesty.--The Rumpus

Rachel McKibbens . . . reminds us why poetry as testimony is so necessary. --Poetry Foundation

McKibbens's blud is a collection of dark, rhythmic poems interested in the ways in which inherited things--bloodlines, mental illnesses, trauma--affect their inheritors. Reveling in form and sound, McKibbens's writing takes back control, undaunted by the idea of sinking its teeth into the ugliest moments of life, while still believing--and looking for--the good underneath all the bruising.

To my daughters I need to say:
Go with the one who loves you biblically.
The one whose love lifts its head to you
despite its broken neck. Whose body
bursts sixteen arms electric
to carry you, gentle the way
old grief is gentle.
Love the love that is messy
in all its too much . . .

Rachel McKibbens is a poet, activist, playwright, essayist, and two-time New York Foundation for the Arts poetry fellow. She is the author of four books and founder of The Pink Door, an annual writing retreat open exclusively to women of color. She lives in Rochester, New York.

This feature require that you enable JavaScript in your browser.
END_OF_DOCUMENT_TOKEN_TO_BE_REPLACED

This feature require that you enable JavaScript in your browser.
END_OF_DOCUMENT_TOKEN_TO_BE_REPLACED

This feature require that you enable JavaScript in your browser.
END_OF_DOCUMENT_TOKEN_TO_BE_REPLACED