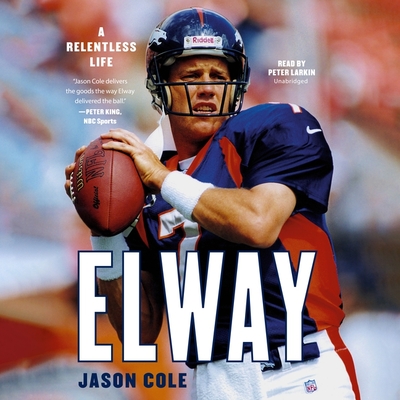 The definitive biography of John Elway, Hall of Fame Quarterback, two-time Super Bowl Champion, now President of Football Operations and General Manager of the Denver Broncos.John Elway's historic moments are known by two-word phrases. Before his NFL career even started, he was at the center of the craziest play in college football history, which is simply known as The Play. Before he signed a pro contract, there was The Trade. His career included The Drive and The Fumble, and, of course, The Helicopter, a play so iconic in Super Bowl lore that it's played on highlight reels every January in the lead up to the game. There are so many memorable comeback victories and heroic plays that people make lists rather than consider Elway in the context of any singular event.Elway's role in the ascendance of quarterbacks to the summit of sports culture was as a dynamic athlete possessed of seemingly limitless talent. In the face of all the talent, Elway's story is filled with one challenge after another. In college, Stanford never went to a bowl game during his four years there and his college career ended with Cal returning a kickoff for a touchdown ... through the Stanford band. Elway was ripped for being petulant after refusing to play for the Baltimore Colts when he was drafted No. 1 overall, and later for his failure to get along with coach Dan Reeves. Over the first 10 years of his career, Elway led Denver to three Super Bowls, but lost in progressively worse fashion each time. Finally, after 15 years of perseverance, Elway led the Broncos to back-to-back championships, including the biggest upset in Super Bowl history. He won the Most Valuable Player award in his final Super Bowl game and then walked away from football.Retirement was no joy. Within four years of quitting football, his father and twin sister both died, and he went through a difficult divorce from his college sweetheart. In search of redemption, Elway returned to football ... at the bottom. He spent eight years running the Colorado Crush of the Arena Football League. He prepared and waited more than a decade to return to his beloved Broncos, at a moment when the franchise had reached an all-time low. While many people doubted Elway initially, he navigated the Broncos through massive changes and won from the start. Denver made the playoffs in each of Elway's first five years, appeared in two Super Bowls, and capped that run with a win in Super Bowl 50, making Elway the rare Hall of Famer to win a title both on and off the field.Through it all, Elway has put his passion for competition on display in a way only a handful of other NFL greats have ever done. Elway is the most complete look ever at one of the most accomplished competitors in the history of American sports.

This feature require that you enable JavaScript in your browser.
END_OF_DOCUMENT_TOKEN_TO_BE_REPLACED

This feature require that you enable JavaScript in your browser.
END_OF_DOCUMENT_TOKEN_TO_BE_REPLACED

This feature require that you enable JavaScript in your browser.
END_OF_DOCUMENT_TOKEN_TO_BE_REPLACED