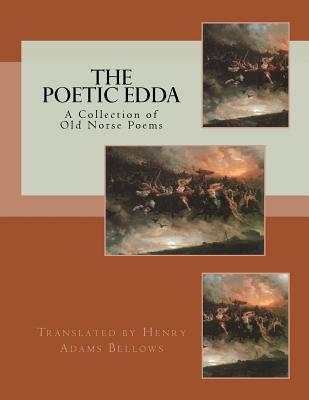 The Poetic Edda - An Unnamed Collection of Old Norse Anonymous Poems - Translated from the Icelandic with an Introduction and Notes By Henry Adams Bellows THERE is scarcely any literary work of great importance which has been less readily available for the general reader, or even for the serious student of literature, than the Poetic Edda. Translations have been far from numerous, and only in Germany has the complete work of translation been done in the full light of recent scholarship. In English the only versions were long the conspicuously inadequate one made by Thorpe, and published about half a century ago, and the unsatisfactory prose translations in Vigfusson and Powell's Corpus Poeticum Boreale, reprinted in the Norr na collection. An excellent translation of the poems dealing with the gods, in verse and with critical and explanatory notes, made by Olive Bray, was, however, published by the Viking Club of London in 1908. In French there exist only partial translations, chief among them being those made by Bergmann many years ago. Among the seven or eight German versions, those by the Brothers Grimm and by Karl Simrock, which had considerable historical importance because of their influence on nineteenth century German literature and art, and particularly on the work of Richard Wagner, have been largely superseded by Hugo Gering's admirable translation, published in 1892, and by the recent two volume rendering by Genzmer, with excellent notes by Andreas Heusler, 194-1920. At the beginning of the collection in the Codex Regius stands the Voluspo, the most famous and important, as it is likewise the most debated, of all the Eddic poems. Another version of it is found in a huge miscellaneous compilation of about the year 1300, the Hauksbok, and many stanzas are included in the Prose Edda of Snorri Sturluson. The order of the stanzas in the Hauksbok version differs materially from that in the Codex Regius, and in the published editions many experiments have been attempted in further rearrangements. On the whole, how ever, and allowing for certain interpolations, the order of the stanzas in the Codex Regius seems more logical than any of the wholesale "improvements" which have been undertaken.

This feature require that you enable JavaScript in your browser.
END_OF_DOCUMENT_TOKEN_TO_BE_REPLACED

This feature require that you enable JavaScript in your browser.
END_OF_DOCUMENT_TOKEN_TO_BE_REPLACED

This feature require that you enable JavaScript in your browser.
END_OF_DOCUMENT_TOKEN_TO_BE_REPLACED