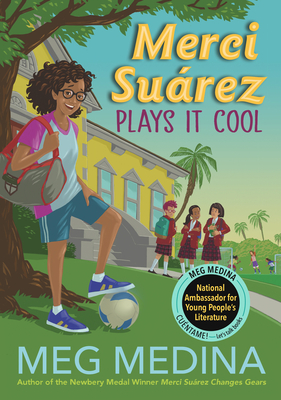 This is book number 3 in the Merci Suárez series.

For Merci Suárez, eighth grade means a new haircut, nighttime football games, and an out-of-town overnight field trip. At home, it means more chores and keeping an eye on Lolo as his health worsens. It’s a year filled with more responsibility and independence, but also with opportunities to reinvent herself. Merci has always been fine with not being one of the popular kids like Avery Sanders, who will probably be the soccer captain and is always traveling to fun places and buying new clothes. But then Avery starts talking to Merci more, and not just as a teammate. Does this mean they’re friends? Merci wants to play it cool, but with Edna always in her business, it’s only a matter of time before Merci has to decide where her loyalty stands. Whether Merci is facing school drama or changing family dynamics, readers will empathize as she discovers who she can count on—and what can change in an instant—in Meg Medina’s heartfelt conclusion to the trilogy that began with the Newbery Medal–winning novel.

Meg Medina, the 2023­­­­–2024 National Ambassador for Young People’s Literature, is a Cuban American author who writes for readers of all ages. Her middle-grade novel Merci Suárez Changes Gears received a Newbery Medal and was a New York Times Book Review Notable Children’s Book of the Year, among many other distinctions. Its sequel, Merci Suárez Can’t Dance, received five starred reviews, while Merci Suárez Plays It Cool received four stars, with Kirkus Reviews calling it “a fabulous finale to a memorable trilogy.” Her most recent picture book, Evelyn Del Rey Is Moving Away, received honors including a Charlotte Zolotow Award and was the 2020 Jumpstart Read for the Record selection, reaching 2.24 million readers. She received a Pura Belpré Author Award Honor for her picture book Mango, Abuela, and Me. Her young adult novel Burn Baby Burn earned numerous distinctions, including being long-listed for the National Book Award and short-listed for the Kirkus Prize. Meg Medina received a Pura Belpré Author Award and a Cybils Award for her young adult novel Yaqui Delgado Wants to Kick Your Ass, which has been adapted and illustrated as a graphic novel by Mel Valentine Vargas. She also received an Ezra Jack Keats Writer Award for her picture book Tía Isa Wants a Car. When she is not writing, Meg Medina works on community projects that support girls, Latino youth, and literacy. She lives with her family in Richmond, Virginia.

The strength of this story lies in the authenticity of Merci’s character and her refreshingly sincere responses to the world around her, even and especially when self-conscious or misguided. Her home among her Cuban American family may not always be the refuge she wants, but it is full of love, support, Cuban traditions, and, occasionally, something delicious made by or with Abuela. . . the book closes on a note of promise as Merci leads her team out onto the field for their first game.
—The Horn Book (starred review)

This final entry in the Merci Suárez trilogy once again shows readers the strength and beauty of family. Readers will love the inside look at clever Merci's thoughts and feelings and may find similarities in their own experiences at school and home. Highly recommended for all middle-grade collections.
—Booklist (starred review)

This feature require that you enable JavaScript in your browser.
END_OF_DOCUMENT_TOKEN_TO_BE_REPLACED

This feature require that you enable JavaScript in your browser.
END_OF_DOCUMENT_TOKEN_TO_BE_REPLACED

This feature require that you enable JavaScript in your browser.
END_OF_DOCUMENT_TOKEN_TO_BE_REPLACED