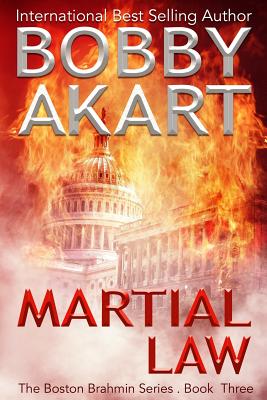 The end begins tomorrow. "Author Bobby Akart possesses the analytic capability of a supercomputer coupled with the expressiveness of an exceptional writer." Amazon Reviews A government big enough to give you everything you want, is strong enough to take everything you have. Thomas Jefferson MARTIAL LAW is a prophetic and prescient novel by best selling author Bobby Akart (Cyber Warfare, EMP: Electromagnetic Pulse, Seeds of Liberty and Evil, Meet Opportunity) which includes a foreword from Steven Konkoly (best selling author of The Perseid Collapse series and the Black Flagged series). The Boston Brahmin series continues as much of America is thrust into bedlam and upheaval following a vicious cyber attack on the country's critical infrastructure. A President, with an election looming as his second term nears an end, conspires with the wealthy and politically powerful Boston Brahmin to bring the country to its knees. While ordinary Americans struggle for survival, others demand answers. A centuries old cadre of Bostonians with roots dating back to the Founding Fathers, are forced to face the tough questions including: Is this the result of a false flag, or is it for the greater good? Political suspense collides with post-apocalyptic thriller fiction as Martial Law, book three in The Boston Brahmin series reveals that all empires collapse eventually and that there have been no exceptions. BOOKS IN THE BOSTON BRAHMIN SERIES Book One: THE LOYAL NINE Book Two: CYBER ATTACK Book Three: MARTIAL LAWBook Four: FALSE FLAG (Available March 2016)PRAISE FOR THE AUTHOR AND THE BOSTON BRAHMIN SERIES "Bobby's attention to detail and real world scenarios assures The Boston Brahmin series will immerse the reader in a world of political suspense and post-apocalyptic thriller fiction." - Steven Konkoly, best selling author of The Perseid Collapse Series "A terrifyingly realistic, prescient new series ... which can only be described as prophetic." - G. Michael Hopf, best selling author of The New World series. "A cracking great start to an epic new series that is going to have many, many loyal followers." - Murray McDonald, best selling author of America's Trust and The God Complex "A political thriller for our times " - Joseph Souza, award winning author of Unpaved Surfaces "The Loyal Nine is a rare combination of gripping and realistic action scenes together with a narrative rich in historical detail ..." - R. E. McDermott, Author of the Dugan Thrillers "The authors spend a good portion of Book One setting up the collapse scenarios. They grounded their narrative in current-day events, then took them to the next level." David Bruns, Author and U.S. Navy Veteran "Bobby Akart can write I'm so looking forward to his upcoming novels. He's a writer to watch. Highly recommended." - A R Shaw, Author of the Graham's Resolution series.

This feature require that you enable JavaScript in your browser.
END_OF_DOCUMENT_TOKEN_TO_BE_REPLACED

This feature require that you enable JavaScript in your browser.
END_OF_DOCUMENT_TOKEN_TO_BE_REPLACED

This feature require that you enable JavaScript in your browser.
END_OF_DOCUMENT_TOKEN_TO_BE_REPLACED