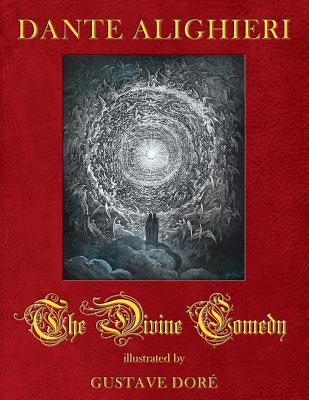 We, Leopold Publishing, set for ourselves the objective of publishing the best version of the Divine Comedy. By best, we mean quality in prose, aesthetics in presentation, typography and engraving for its plates, of course. But, as the Divine Comedy is a story Dante wrote in a cryptic fashion not every reader can fully understand today, we managed to add to it as many commentaries and explanations as necessary to solve this problem.
In the end, we obtained: a translation in blank verse in the style of Milton by Rev. Henry Francis Cary (which was the first complete English translation of the greatest works of Dante); each canto begins with a synopsis (equally presents in the table of contents); 2140 technical and historical footnotes; 50 pages of explanatory introduction written by great Italian specialist of Dante, Francesco Flamini (translated by Freeman M. Josselyn), which is illustrated with numerous technical diagrams and sketches; and, of course, all plates great French artist Gustave Dor did for the Divine Comedy between 1857 and 1867.
As a matter of fact, the original English version of the Divine Comedy illustrated by Gustave Dor was M. Cary's translation. To those who are familiar with the translation Cary did of the Divine Comedy, we find useful to precise that the text we chose for this book is his third edition of it; so with all typos and mistakes fixed with the help of famous English translator John Aitken Carlyle.
To those who are familiar with the plates Gustave Dor drew for the Divine Comedy, we scanned ours from original printings of his 1857 (Inferno) and 1867 (Purgatorio and Paradiso) editions before we carefully restored them, fixed small scratches and various printing imperfections visible on any original copies. We also reviewed their contrasts (real black inking instead of gray) so as to restitute their depths often lost due to insufficient inking during the printing process. Also, we opted for a large format (8.5 x 11 inches for 4 pounds of weight). As an aside, some readers might be surprised to discover in this text numerous symbolical allusions, references and cryptic descriptions belonging to the realm of masonry and its rites, written several centuries before the appearance of the first masonic lodges in England in early 1700's.

This feature require that you enable JavaScript in your browser.
END_OF_DOCUMENT_TOKEN_TO_BE_REPLACED

This feature require that you enable JavaScript in your browser.
END_OF_DOCUMENT_TOKEN_TO_BE_REPLACED

This feature require that you enable JavaScript in your browser.
END_OF_DOCUMENT_TOKEN_TO_BE_REPLACED