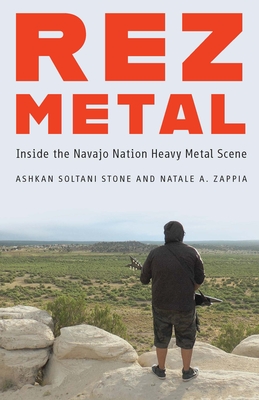 Rez Metal captures the creative energy of Indigenous youth culture in the twenty-first century. Bridging communities from disparate corners of Indian Country and across generations, heavy metal has touched a collective nerve on the Navajo Reservation in Arizona in particular. Many cultural leaders—including former Navajo president Russell Begaye—have begun to recognize heavy metal’s ability to inspire Navajo communities facing chronic challenges such as poverty, depression, and addiction. Heavy metal music speaks to the frustrations, fears, trials, and hopes of living in Indian Country.

Rez Metal highlights a seminal moment in Indigenous heavy metal: when Kyle Felter, lead singer of the Navajo heavy metal band I Dont Konform, sent a demo tape to Flemming Rasmussen, the Grammy Award–winning producer of several Metallica albums, including Master of Puppets. A few months later, Rasmussen, captivated by the music, flew from Denmark to Window Rock, Arizona, to meet the band. Through a series of vivid images and interviews focused on the venues, bands, and fans of the Navajo Nation metal scene, Rez Metal provides a window into this fascinating world.

“Rez Metal represents the creative genius of contemporary Indigenous popular culture. Set within the heart of the Navajo Nation and including the voices of elders, council members, and metalheads of all ages, Soltani Stone and Zappia demonstrate the importance of metal as a source of hope and inspiration for Indigenous youth and its prominence as an organic Indigenous expressive culture.”—Kyle T. Mays, author of Hip Hop Beats, Indigenous Rhymes: Modernity and Hip Hop in Indigenous North America

This feature require that you enable JavaScript in your browser.
END_OF_DOCUMENT_TOKEN_TO_BE_REPLACED

This feature require that you enable JavaScript in your browser.
END_OF_DOCUMENT_TOKEN_TO_BE_REPLACED

This feature require that you enable JavaScript in your browser.
END_OF_DOCUMENT_TOKEN_TO_BE_REPLACED