The Pirates of Pacta Servanda (Pillars of Reality #4) (Compact Disc) 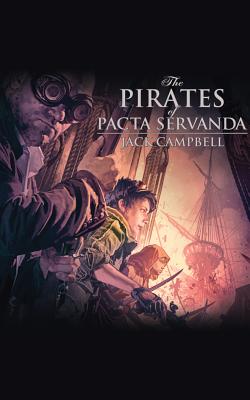 By Jack Campbell, MacLeod Andrews (Read by)
$19.99
Email or call for price

This is book number 4 in the Pillars of Reality series.

"The world feels oddly strained, like a line pulled too taunt and apt to snap, smashing everything in its path."

Master Mechanic Mari and Mage Alain have survived every attempt to stop them, but their enemies are determined to kill Mari, the only one who can save her world from a storm of destruction. As armies begin to gather and cities seethe with tension, Mari, Alain, and their friends must prepare to confront the storm in the place it first appeared: the broken kingdom of Tiae.

The dangers facing them demand perilous raids, tough battles, and more than a little piracy. Beating the Mechanics Guild and the Mage Guild that have controlled the world of Dematr for centuries will require an unprecedented alliance under Mari's command of rebellious Mechanics, Mages, and common folk who know that together they can change the world, but separately they will all lose.

This feature require that you enable JavaScript in your browser.
END_OF_DOCUMENT_TOKEN_TO_BE_REPLACED

This feature require that you enable JavaScript in your browser.
END_OF_DOCUMENT_TOKEN_TO_BE_REPLACED

This feature require that you enable JavaScript in your browser.
END_OF_DOCUMENT_TOKEN_TO_BE_REPLACED