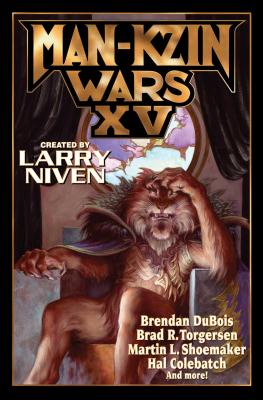 This is book number 15 in the Man-Kzin Wars series.

THE POPULAR MAN-KZIN WARS SERIES ROARS BACK INTO ACTION! New stories of the war between humanity and the catlike Kzin from Brad R. Torgersen, Brendan DuBois, Martin L. Shoemaker, and more!

THE WAR BETWEEN HUMANITY AND THE KZIN REIGNITES!

The predatory catlike warrior race known as the kzin never had a hard time dealing with all those they encountered, conquering alien worlds with little effort. That is until they came face to face with the leaf-eaters known as humans. Small of stature and lacking both claws and fangs, the humans should have been easy prey. But for years now the humans and the kzin have been engaged in a series of wars, with neither side able to declare decisive victory once and for all.

About the Man-Kzin War Series:

Larry Niven is the multiple Hugo- and Nebula Award-winning author of the Ringworld series, along with many other science fiction masterpieces. With Jerry Pournelle, he is the author of the all-time SF classic The Mote in God's Eye and subsequent books in the series, as well as the novels in the Heorot series. He lives in Chatsworth, California.

This feature require that you enable JavaScript in your browser.
END_OF_DOCUMENT_TOKEN_TO_BE_REPLACED

This feature require that you enable JavaScript in your browser.
END_OF_DOCUMENT_TOKEN_TO_BE_REPLACED

This feature require that you enable JavaScript in your browser.
END_OF_DOCUMENT_TOKEN_TO_BE_REPLACED