The Missing Lynx: The Past and Future of Britain's Lost Mammals (Paperback) 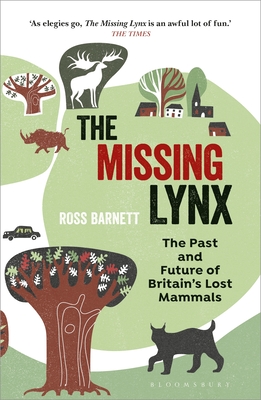 Britain was a very different place 15,000 years ago – home to lions, lynx, bears, wolves, bison and many more megafauna. But as its climate changed and human populations expanded, most of early Britain's largest mammals disappeared. Will advances in science and technology mean that we can one day bring these mammals back? And should we?

In The Missing Lynx, palaeontologist Ross Barnett uses case studies, new fossil discoveries and biomolecular evidence to paint a picture of these lost species and to explore the ecological significance of their disappearance. He discusses how the Britons these animals shared their lives with might have viewed them and investigates why some species survived while others vanished.

Barnett also looks in detail at the realistic potential of reintroductions, rewilding and even of resurrection in Britain and overseas, from the successful return of beavers in Argyll to the revolutionary Pleistocene Park in Siberia, which has already seen progress in the revival of 'mammoth steppe' grassland.

As widespread habitat destruction, climate change and an ever-growing human population lead us inexorably towards the sixth extinction, this timely book explores the spaces that extinction has left unfilled. And by helping us to understand why some of our most charismatic animals are gone, Ross Barnett encourages us to look to a brighter future, one that might see these missing beasts returned to the land on which they once lived and died.

Ross Barnett is a palaeontologist with a PhD in Zoology from the University of Oxford. He specialises in seeking, analysing and interpreting ancient DNA, but his area of expertise is the genetics and phylogeny of cats, especially the extinct sabretooths. Barnett's research has led to many remarkable findings in recent years and has involved investigating escaped lynx in Edwardian Devon, rubbishing claims that the yeti is an ice-age polar bear and seeking the ancestral home of the enigmatic Orkney vole. In 2018, he received the Palaeontological Association's Gertrude Elles Award for Public Engagement. Barnett currently lives in the Highlands of Scotland with his wife and two daughters.

“As elegies go, The Missing Lynx is an awful lot of fun.” —The Times

“Rewilding is certainly romantic but is it practical or even desirable? It all needs thinking through, and Barnett, who makes a compelling case in favour of the idea, can help.” —BBC Wildlife

“The Missing Lynx is a joyous rabbit-hole to venture down.” —Geographical

“Barnett's writing is clear and unobtrusively witty ... And the book is full of cheery, Terry Pratchett-esque footnotes.” —The Times

“A cracking read and rather heartbreaking to think about all those megafauna we pushed over the edge. Highly recommended!” —@NHMdinolab

“In short, I absolutely loved this book. It … weaves together stories of incredible natural history (the amazing ways in which species live or lived), cutting-edge scientific research, and tales from museum storerooms, as well as positive insight into environmental conservation.

“His writing is full of admiration for the resourcefulness of Palaeolithic tribespeople – his descriptions of an Ice Age economy that ran on mammoths, and of the mammoth hunts themselves, are evocative.” —The Times

“The Missing Lynx is one of those rare popular science books that manages to serve up a hearty plate of captivating science with a delicious side of escapism.” —The Palaeontological Association

“The Missing Lynx, with its copious amounts of information about the lives and extinctions of its subject, leavened with sufficiently frequent witticisms, flippant off-hand remarks, and bits of gallows humor to make such serious subjects sufficiently psychologically palatable so as to allow them to sink in to the minds of its readers and be remembered ... It is most whole-heartedly an enthusiastically recommended to all.” —The Well-read Naturalist

“The Missing Lynx … is a fascinating publication by a specialist in analysing and interpreting ancient DNA. … Packed full of scientific data and detail of fossil discoveries … it is written with great humour, even cunningly weaving in snatches from literature and film.” —talkinghumanities

This feature require that you enable JavaScript in your browser.
END_OF_DOCUMENT_TOKEN_TO_BE_REPLACED

This feature require that you enable JavaScript in your browser.
END_OF_DOCUMENT_TOKEN_TO_BE_REPLACED

This feature require that you enable JavaScript in your browser.
END_OF_DOCUMENT_TOKEN_TO_BE_REPLACED