The Lives of Tao (Compact Disc) 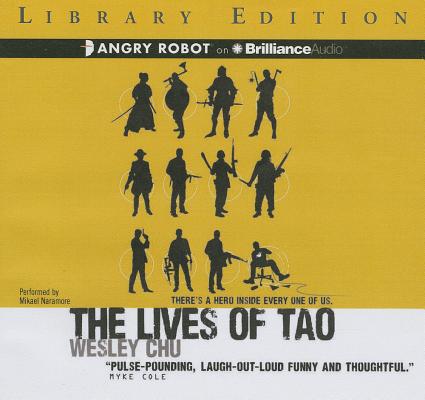 By Wesley Chu, Mikael Naramore (Read by)
$49.97
Email or call for price

This is book number 1 in the Tao series.

When out-of-shape IT technician Roen wakes up and starts hearing voices in his head, he naturally assumes he's losing it.

As of last night, he has a passenger in his brain--an ancient alien life-form called Tao, whose race crash-landed on Earth before the first fish crawled out of the oceans. Over the millennia his people have trained human heroes to be great leaders, to advance our species at a rate far beyond what it would have achieved on its own. Split into two opposing factions--the peace-loving, but under-represented Prophus, and the savage, powerful Genjix--the aliens have been in a state of civil war for centuries. Both sides are searching for a way off-planet...and the Genjix will sacrifice the entire human race, if that's what it takes.

So now Roen must train to be a hero worthy of his unwanted companion. Like that's going to end up well....

"Wesley Chu is my hero.... He has to be the coolest science fiction writer in the world." --Lavie Tidhar, World Fantasy Award-winning author of Osama

This feature require that you enable JavaScript in your browser.
END_OF_DOCUMENT_TOKEN_TO_BE_REPLACED

This feature require that you enable JavaScript in your browser.
END_OF_DOCUMENT_TOKEN_TO_BE_REPLACED

This feature require that you enable JavaScript in your browser.
END_OF_DOCUMENT_TOKEN_TO_BE_REPLACED