The Map of Chaos: A Novel (The Map of Time Trilogy #3) (Paperback) 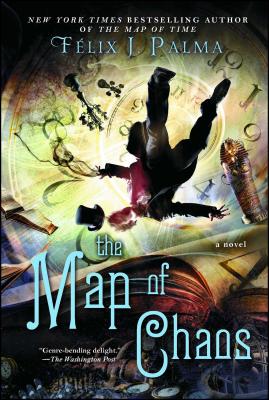 This is book number 3 in the The Map of Time Trilogy series.

From the New York Times bestselling author of The Map of Time and The Map of the Sky, the final installment in the award-winning trilogy that The Washington Post called “a big, genre-bending delight.”

When the person he loves most dies in tragic circumstances, the mysterious protagonist of The Map of Chaos does all he can to speak to her one last time. A session with a renowned medium seems to offer the only solution, but the experience unleashes terrible forces that bring the world to the brink of disaster. Salvation can only be found in The Map of Chaos, an obscure, hand-written mathematical treatise that he is desperate to uncover. In his search, he is given invaluable help by Sir Arthur Conan Doyle, Lewis Carroll, and of course by H.G. Wells, whose Invisible Man seems to have escaped from the pages of his famous novel to sow terror among mankind. They alone can discover the means to save the world and to find the path that will reunite the lovers separated by death.

Proving once again that he is “a master of ingenious plotting” (Kirkus Reviews), Félix J. Palma brings together a cast of real and imagined literary characters in Victorian London, when spiritualism is at its height. The Map of Chaos is a spellbinding adventure that mixes impossible loves, nonstop action, real ghosts, and fake mediums, all while paying homage to the giants of science fiction.

Félix J. Palma has been acclaimed by critics as one of the most brilliant and original storytellers of our time. His devotion to the short story genre has earned him more than a hundred awards. The Map of Time, his first book published in the United States, was an instant New York Times bestseller and received the prestigious 2008 Ateneo de Sevila XL Prize. It has been published in more than thirty countries. Along with The Map of Time Trilogy, he is also the author of The Heart and Other Viscera. Palma lives in Spain. Please visit FelixJPalma.es.

Praise for The Map of Chaos

"The Map of Chaos is a vividly drawn odyssey spanning time and space that calls on three of the literary greats of the past century to answer the fundamental question of our place in the universe and to demonstrate the enduring power of undying love."
— Jack Du Brul, New York Times bestselling author

"It’s no surprise that Palma’s heroes are writers. He wears his love for old-fashioned storytelling on an ink-stained sleeve. Bookworms are always searching for new realms in which to lose themselves. With this trilogy, Palma offers an homage and multiple new worlds to explore."
— The Washington Post

"Palma displays a deft hand with this diverse group of characters and genres, blending them effortlessly into a fantastic yarn."
— Publishers Weekly

"The finale to Félix J. Palma's fantastical trilogy is a veritable treat for the mind and senses alike...it literally will blow your mind... Pick up THE MAP OF CHAOS and prepare to leave behind this world, and a few others, for several days!"
— Book Reporter

"Intricate. Compelling. A kaleidoscope of wonder."
— Mario Acevedo, author of the bestselling The Nymphos of Rocky Flats

Praise for The Map of the Sky:

“The unreal becomes real, fantasy becomes history, and the reader is thoroughly entertained by an unending parade of bafflements and surprises. This book is a complete delight.”
— K.W. Jeter, author of Infernal Devices

“A top-notch sequel…Fans of intelligent science fiction as well as historical thrillers will be rewarded.”
— Publisher's Weekly, starred review

"The wondrous Palma genre-hops to great effect in this worthy sequel.”
— Booklist

“The Map of the Sky keeps the reader guessing, checking and thinking, all the while providing many sidelights on the literary history of sci-fi itself.”
— The Wall Street Journal

Praise for The Map of Time:

“A singularly inventive, luscious story with a core of pure, unsettling weirdness. With unnerving grace and disturbing fantasy, it effortlessly straddles that impossible line between being decidedly familiar, and yet absolutely new.”
— Cherie Priest, author of Boneshaker

“Palma makes his U.S. debut with the brilliant first in a trilogy, an intriguing thriller that explores the ramifications of time travel in three intersecting narratives.”
— Publishers Weekly, starred review

“Readers who embark on the journey...will be richly rewarded."
— Booklist, starred review

“Palma is a master of ingenious plotting.”
— Kirkus Reviews

“A thought-provoking and entertaining read.”
— The Boston Globe

This feature require that you enable JavaScript in your browser.
END_OF_DOCUMENT_TOKEN_TO_BE_REPLACED

This feature require that you enable JavaScript in your browser.
END_OF_DOCUMENT_TOKEN_TO_BE_REPLACED

This feature require that you enable JavaScript in your browser.
END_OF_DOCUMENT_TOKEN_TO_BE_REPLACED