The Source of All Things: A Memoir (Hardcover) 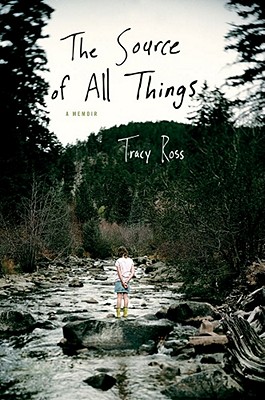 Tracy Ross never knew her biological father, who died after a brain aneurysm when she was still an infant. So when her mother married Donnie, a gregarious man with an all-wheel-drive jeep and a love of hiking, four-year-old Tracy was ecstatic to have a father figure in her life. A loving and devoted step-father, Donnie introduced Tracy's family to the joys of fishing, deer hunting, camping, and hiking among the most pristine mountains of rural Idaho. Donnie was everything Tracy dreamed a dad would be--protective, brave, and kind. But when his dependence on his eight-year-old daughter's companionship went too far, everything changed.

Once Donnie's nighttime visits began, Tracy's childhood became a confusing blend of normal little girl moments and the sickening, secret invasion of her safety. Tormented by this profound betrayal, Tracy struggled to reconcile deeply conflicting feelings about her stepfather: on the one hand, fear and loathing, on the other hand, the love any daughter would have for her father. It was not until she ran away from home as a teenager that her family was forced to confront the abuse--and it tore them apart.

At sixteen, realizing that she must take control of her own future, Tracy sent herself to boarding school and began the long slow process of recovery. There, in the woods of Northern Michigan, Tracy felt called back to the natural world she had loved as a child. Over the next twenty years, the mountains and rivers of North America provided Tracy with strength, confidence, comfort, and inspiration. From trekking through the glaciers of Alaska to guiding teenagers through the deserts of Utah, Tracy pushed herself to the physical limit on her way to becoming whole again. Yet, as she came into her own, found love, and even started a family, Tracy realized that in order to truly heal she had to confront her stepfather about the demons from the past haunting them both. "The Source of All Things "is a stunning, unforgettable story about a wounded daughter, her stepfather, and a mistake that has taken thirty years and thousands of miles of raw wilderness to reconcile. Only Tracy can know if Donnie is forgivable. But one thing is for certain: In no other story of abuse does a survivor have as much strength, compassion, bravery, and spirit as Tracy displays in "The Source of All Things.

"Disturbing but beautifully written...[We've] heard stories like these before, but rarely in such clear, unsentimental prose." --O magazine

"Brave and heartbreaking...her courageous story will bring solace and inspiration to others drowning in fear and lacking a voice of their own." --Elle magazine

"[An] extraordinary journey of anguish and redemption..." -People magazine

“The Source of All Things is a brave book. Sustained by her love of nature, Tracy Ross’s search for truth, clarity, and vindication involving her childhood abuse is told in an easygoing voice that allows us to readily digest her horrors. In a kind of ironic silver lining, the man who abused Tracy also cultivated her love of the wild, introducing her to its exhilarating applications and healing powers where she always found solace—perhaps it was his unconscious attempt at salvation?” – Norman Ollestad, author of Crazy for the Storm

“Tracy Ross is unflinchingly honest as she portrays a life scarred by dark secrets and deeply concealed wounds. But it is in her beloved wilderness that we exalt in her hard won triumphs of self discovery and the serenity of forgiveness. The Source of All Things is a mesmerizing memoir that lingers in your mind long after you close the book.” - Mary Alice Monroe, New York Times bestselling author of The Butterfly’s Daughter


“Tracy Ross is fearless. She has faced the black stuff of her childhood and turned it into a memoir that will grip you, break your heart, and finally sing to you. Most of all, you will be glad she survived to write this funny, inspiring, beautiful book.” – Claire Dederer, author of Poser: My Life in Twenty-Three Yoga Poses

"I loved this book. Part survivor memoir and part love letter to  nature, I found The Source of All Things compulsively readable and intensely enthralling. " –Julia Scheeres, author of A Thousand Lives

“In this brave memoir Tracy Ross embodies the detachment necessary to function while the wound of childhood sexual trauma festers unseen, erupting in self-destructive, dangerous behaviors until Ross can finally learn the truth, and thus begin to heal. In speaking her truth, in making herself vulnerable, she will help heal others.”--Janine Latus, author of If I Am Missing or Dead: a sister’s story of love, murder and liberation

This feature require that you enable JavaScript in your browser.
END_OF_DOCUMENT_TOKEN_TO_BE_REPLACED

This feature require that you enable JavaScript in your browser.
END_OF_DOCUMENT_TOKEN_TO_BE_REPLACED

This feature require that you enable JavaScript in your browser.
END_OF_DOCUMENT_TOKEN_TO_BE_REPLACED