Boom, Bust, Boom: A Story about Copper, the Metal That Runs the World (Hardcover) 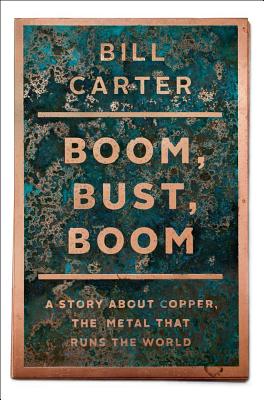 From "a first-rate writer in the fascinating tradition of Junger and Krakauer" (Jim Harrison, author of Legends of the Fall), a sweeping account of civilization's complete dependence on copper and what it all means for people, nature, and the global economy. A SWEEPING ACCOUNT OF CIVILIZATION'S COMPLETE DEPENDENCE ON COPPER AND WHAT IT MEANS FOR PEOPLE, NATURE, AND OUR GLOBAL ECONOMY COPPER is a miraculous and contradictory metal, essential to nearly every human enterprise. For most of recorded history, this remarkably pliable and sturdy substance has proven invaluable: not only did the ancient Romans build their empire on mining copper but Christopher Columbus protected his ships from rot by lining their hulls with it. Today, the metal can be found in every house, car, airplane, cell phone, computer, and home appliance the world over, including in all the new, so-called green technologies. Yet the history of copper extraction and our present relationship with the metal are fraught with profound difficulties. Copper mining causes irrevocable damage to the Earth, releasing arsenic, cyanide, sulfuric acid, and other deadly pollutants into the air and water. And the mines themselves have significant effects on the economies and wellbeing of the communities where they are located. With Red Summer and Fools Rush In, Bill Carter has earned a reputation as an on-the-ground journalist adept at connecting the local elements of a story to its largest consequences. Carter does this again--and brilliantly--in Boom, Bust, Boom, exploring in an entertaining and fact-rich narrative the very human dimension of copper extraction and the colossal implications the industry has for every one of us. Starting in his own backyard in the old mining town of Bisbee, Arizona--where he discovers that the dirt in his garden contains double the acceptable level of arsenic--Bill Carter follows the story of copper to the controversial Grasberg copper mine in Indonesia; to the "ring" at the London Metal Exchange, where a select group of traders buy and sell enormous amounts of the metal; and to an Alaskan salmon run threatened by mining. Boom, Bust, Boom is a highly readable account--part social history, part mining-town exploration, and part environmental investigation. Page by page, Carter blends the personal and the international in a narrative that helps us understand the paradoxical relationship we have with a substance whose necessity to civilization costs the environment and the people who mine it dearly. The result is a work of first-rate journalism that fascinates on every level.

“Copper is the curse of the southwest. Bill Carter’s blazing book takes us to the crime scene where our lust for things murders the earth. Time to kill the cellphone, leave twitter to the twits and listen up.”

"Bill Carter has extracted something that remains all but unnoticed by most people—copper—and told an incredible story about this amazing metal. Boom, Bust, Boom is the best sort of journalism: beautifully written, rich in detail and impossible to ignore. I particularly loved how Carter wove a personal story into a topic of global scope. I know, as a writer, how hard that is to pull off, and as a reader i am always amazed when someone does. It is a superb book." —Sebastian Junger

“Bill Carter’s new book is utterly engaging. I want to use the words fabulous and hearty. We often think we know the world but then we read a book that tells us we didn’t. Carter is a hard man and he humiliates the copper industry and the grave dangers they carelessly expose us to. A necessary read for thinking Americans.” —Jim Harrison

This feature require that you enable JavaScript in your browser.
END_OF_DOCUMENT_TOKEN_TO_BE_REPLACED

This feature require that you enable JavaScript in your browser.
END_OF_DOCUMENT_TOKEN_TO_BE_REPLACED

This feature require that you enable JavaScript in your browser.
END_OF_DOCUMENT_TOKEN_TO_BE_REPLACED