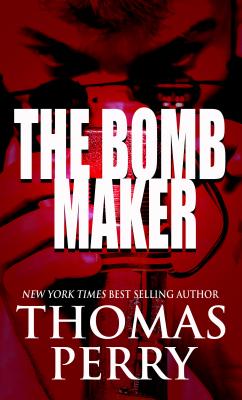 A bomb is more than a weapon. A bomb is an expression of the bomber's thoughts about you, his predictions of your behavior--a performance designed to fool you into making one fatally wrong move. In The Bomb Maker, Edgar Award-winning author Thomas Perry introduces us to the dark corners of a mind intent on transforming a simple machine into an act of murder--and to those committed to preventing that outcome at any cost.

A threat is called into the LAPD Bomb Squad, a team dispatched to a house whose owner is away, and a bomb disguised inside photography equipment exploded in the kitchen. But it is a second bomb hidden in the basement that has devastating consequences--half of the entire Bomb Squad is obliterated within seconds. The fragmented unit turns to Dick Stahl, a former Bomb Squad commander who now operates his own private security company. Having just returned from a grueling job in Mexico, Stahl is reluctant to accept the offer, but senior technicians he had trained were among those killed. On his first day back at the head of the squad, Stahl's team is dispatched to a suspected car bomb outside a gas station. It quickly becomes clear to him that they are dealing with the same mastermind behind the weapon that killed fourteen highly trained men and women barely twenty-four hours before--and that the intended target may be the Bomb Squad itself.

As the shadowy organization sponsoring this campaign of terror puts increasing pressure on the bomb maker, and Stahl becomes dangerously entangled with a member of his own team, the fuse on this high-stakes plot only burns faster. The Bomb Maker is Thomas Perry's biggest, most unstoppable thriller yet.

Thomas Perry is the bestselling author of over twenty novels, including the critically acclaimed Jane Whitefield series, The Old Man, Forty Thieves, and The Butcher's Boy, which won the Edgar Award. He lives in Southern California.

This feature require that you enable JavaScript in your browser.
END_OF_DOCUMENT_TOKEN_TO_BE_REPLACED

This feature require that you enable JavaScript in your browser.
END_OF_DOCUMENT_TOKEN_TO_BE_REPLACED

This feature require that you enable JavaScript in your browser.
END_OF_DOCUMENT_TOKEN_TO_BE_REPLACED