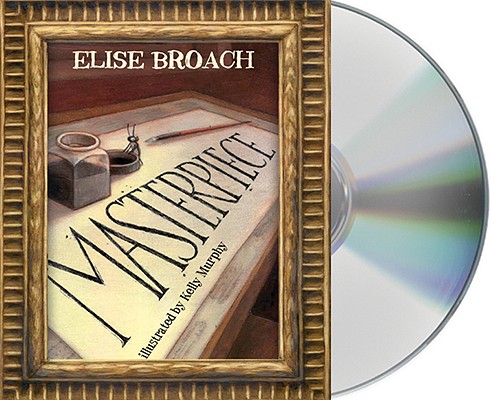 By Elise Broach, Jeremy Davidson (Read by)
$14.99
Email or call for price.

Marvin lives with his family under the kitchen sink in the Pompadays’ apartment. He is very much a beetle. James Pompaday lives with his family in New York City. He is very much an eleven-year-old boy.After James gets a pen-and-ink set for his birthday, Marvin surprises him by creating an elaborate miniature drawing. James gets all the credit for the picture and before these unlikely friends know it they are caught up in a staged art heist at the Metropolitan Museum of Art that could help recover a famous drawing by Albrecht Dürer. But James can’t go through with the plan without Marvin’s help. And that’s where things get really complicated (and interesting!). This fast-paced mystery will have young readers on the edge of their seats as they root for boy and beetle.  In Shakespeare’s Secret Elise Broach showed her keen ability to weave storytelling with history and suspense, and Masterpiece is yet another example of her talent. This time around it’s an irresistible miniature world, fascinating art history, all wrapped up in a special friendship— something for everyone to enjoy.

ELISE BROACH is the author of the ALA Notable Book "Shakespeare's Secret "and "Desert Crossing." She holds undergraduate and graduate degrees in history from Yale University. She lives with her family in Easton, Connecticut. KELLY MURPHY has illustrated many books for children, including "Gallop-O-Gallop." She lives in North Attleboro, Massachusetts. Jeremy Davidson has appeared extensively on stage, including in the Kennedy Center's production of Cat on a Hot Tin Roof, in which he starred opposite his now-wife Mary Stuart Masterson. On Broadway, he appeared in Epic Proportions and Off-Broadway in Manhattan Theater Club's La Terasse. Davidson has appeared in films including Salt, Little Chenier, Deprivation, and Skeletons in the Closet, and he wrote and directed the film Tickling Leo. He has appeared on numerous television shows, including Army Wives, Law & Order, Brothers & Sisters, The Kill Point, Cold Case, Without a Trace, Boston Legal, and Ally McBeal. Davidson won an "Audiofile "Earphones Award for Allan Folsom's "The Machiavelli Covenant," published by Macmillan Audio. He has also narrated books including Elise Broach's critically-acclaimed children's book "Masterpiece," as well as titles by Robert Edsel, Eric Van Lustbader, and Ray Lemoine.

"It's better to turn to a book for young listeners that delivers on the full power of audio to create an alternate and real universe. That potential is fully realized in Masterpiece by Elise Broach...Marvin and his opinionated family are an auditory delight, and the reading by Jeremy Davidson is entertaining, for adults and children alike." – Winston-Salem Journal  "Jeremy Davidson brings an eager, animated voice to Elise Broach's Masterpiece...The many voices and range of moods, from ruefulness to elation, ably convey the perplexities and ingenuities that arise when a boy and a bug team up to take on the world." – The Washington Post

"Davidson skillfully portrays the various characters, easily transitioning between their voices. This marvelous story is sure to be a hit with middle school students." – School Library Journal, Starred Review

“Actor Jeremy Davidson uses his versatile voice and excellent timing to deliver a superb reading… [He] doesn't miss a beat in dramatizing this tale's strong emotions and making us empathize with Marvin and James. It's compelling listening.” – Sacramento Bee

“Jeremy Davidson’s reading of this audiobook is stellar. He captures James’ fears and concerns, his loneliness, and his joy when he makes a friend. The emotions that Davidson manages to convey in his voice are ones that any listener will respond to and be able to identify with.” – www.lookingglassreview.com

"Brilliantly crafted by Elise Broach, the audio version of this title is an engaging romp for middle-grade listeners who may discover there's more than meets the eye, when you read with your ears." - Birmingham Parent

This feature require that you enable JavaScript in your browser.
END_OF_DOCUMENT_TOKEN_TO_BE_REPLACED

This feature require that you enable JavaScript in your browser.
END_OF_DOCUMENT_TOKEN_TO_BE_REPLACED

This feature require that you enable JavaScript in your browser.
END_OF_DOCUMENT_TOKEN_TO_BE_REPLACED