12 Notes: On Life and Creativity (Hardcover) 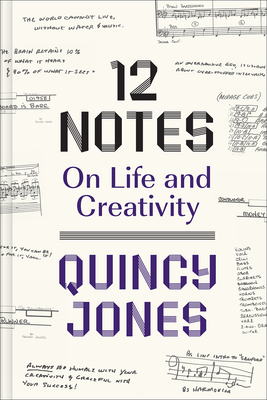 Wisdom and musings on creativity and life from one of the world’s most beloved musicians, producers, and mentors, Quincy Jones

12 Notes is a self-development guide that will affirm that creativity is a calling that can and should be answered, no matter your age or experience. Drawing from his own life, and those of his many creative collaborators past and present, Quincy Jones presents readers with lessons that are hardworking and accessible, yet speak to the passion of self-expression. He includes sections as deep as how to transform grief into power, and as practical as how to set goals and articulate intentions through daily affirmations. Weaving his story throughout, Jones lets readers in on his own creative process, as well as the importance of letting honesty, hard work, and good relationships drive your career.

Named by Time Magazine as one of the six most influential Jazz artists of the 20th century, Quincy Jones is an impresario in the broadest and most creative sense of the word. For over seven decades Jones’ career has encompassed the roles of composer, record producer, artist, film producer, arranger, conductor, instrumentalist, TV producer, record company executive, television station owner, magazine founder, multi-media entrepreneur, and humanitarian. Among the multitude of awards that he has received for his contributions are an Emmy Award, seven Academy Award nominations, the Academy of Motion Picture Arts and Sciences’ Jean Hersholt Humanitarian Award, and 28 Grammy Awards with a total of 80 nominations. He is the recipient of the Republic of France’s Commandeur de la Legion d’Honneur, and in 2001 he was inducted as a “Kennedy Center Honoree,” the United States’ most prestigious cultural award, for his lifetime contributions to the culture of the country. He was recognized by the National Endowment for the Arts as a Jazz Master--the nation’s highest jazz honor, and in 2010 was bestowed the National Medal of Arts, our nation’s highest artistic honor.  In 2016, Jones received a Tony Award for Best Revival of a Musical for the Broadway production of The Color Purple. The award completed the rare EGOT set for Jones, an exclusive club of artists who have received an Emmy, Grammy, Oscar, and Tony Award.

This feature require that you enable JavaScript in your browser.
END_OF_DOCUMENT_TOKEN_TO_BE_REPLACED

This feature require that you enable JavaScript in your browser.
END_OF_DOCUMENT_TOKEN_TO_BE_REPLACED

This feature require that you enable JavaScript in your browser.
END_OF_DOCUMENT_TOKEN_TO_BE_REPLACED