A Day for Rememberin': Inspired by the True Events of the First Memorial Day (Hardcover) 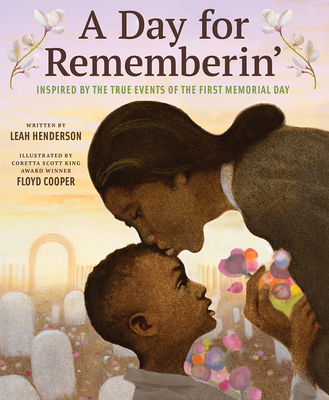 Today is a special day. Eli knows it’s important if he’s allowed to miss one second of school, his “hard-earned right.”
Inspired by true events and told through the eyes of a young boy, this is the deeply moving story about what is regarded as the first Memorial Day on May 1, 1865. Eli dresses up in his best clothes, Mama gathers the mayflowers, Papa straightens his hat, and together they join the crowds filling the streets of Charleston, South Carolina, with bouquets, crosses, and wreaths. Abolitionists, missionaries, teachers, military officers, and a sea of faces Black, Brown, and White, they march as one and sing for all those who gave their lives fighting for freedom during the Civil War.
With poignant prose and celebratory, powerful illustrations, A Day for Rememberin’ shines light on the little-known history of this important holiday and reminds us never to forget the people who put their lives on the line for their country. The book is illustrated by award-winning illustrator Floyd Cooper and includes archival photos in the back matter, as well as an author’s note, bibliography, timeline, and index.

Leah Henderson writes for young readers of all ages, and her books have been named a Children’s Africana Book Awards Notable and a Bank Street Best Book. Leah holds an MFA in writing and is on the faculty of Spalding University’s graduate writing program. She resides in Washington, D.C.

**STARRED REVIEW**
"Cooper’s illustrations are soft and gentle. . . Henderson’s choice to show the development of this day of remembrance from the perspective of a child involved in the literal work required to build it gives the story weight and meaning."
— Kirkus Reviews

**STARRED REVIEW**
"Cooper’s mixed-media illustrations beautifully depict the community’s emotions and their actions in creating a memorial. Soft colors gently envelop readers in the story... An enchanting account of the first Memorial Day, this book is recommended for all."
— School Library Journal

"The moving story, as seen through the eyes of a newly freed boy watching his father and others work hard in anticipation of memorial festivities, is enhanced beautifully by Cooper’s illustrations."
— Booklist

"Henderson’s affecting narrative resonates with reverence, and Cooper’s prolific use of muted browns and yellows creates a solemn yet celebratory tone... This worthy title offers another little-known fact about African American contributions that are an imperative part of America’s history and traditions."
— The Horn Book Magazine

This feature require that you enable JavaScript in your browser.
END_OF_DOCUMENT_TOKEN_TO_BE_REPLACED

This feature require that you enable JavaScript in your browser.
END_OF_DOCUMENT_TOKEN_TO_BE_REPLACED

This feature require that you enable JavaScript in your browser.
END_OF_DOCUMENT_TOKEN_TO_BE_REPLACED