I Survived the Wellington Avalanche, 1910 (I Survived #22) (Paperback) 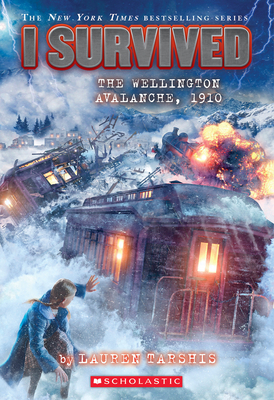 The snow came down faster than train crews could clear the tracks, piling up in drifts 20 feet high. At the Wellington train depot in the Cascade Mountains, two trains sat stranded, blocked in by snow slides to the east and west. Some passengers braved the storm to hike off the mountain, but many had no choice but to wait out the storm.

But the storm didn’t stop. One day passed, then two, three . . . six days. The snow turned to rain. Then, just after midnight on March 1, a lightning storm struck the mountain, sending a ten-foot-high wave of snow barreling down the mountain. The trains tumbled 150 feet. 96 people were dead.

Lauren Tarshis's New York Times bestselling I Survived series tells stories of young people and their resilience and strength in the midst of unimaginable disasters and times of turmoil. Lauren has brought her signature warmth and exhaustive research to topics such as the battle of D-Day, the American Revolution, Hurricane Katrina, the bombing of Pearl Harbor, and other world events. She lives in Connecticut with her family, and can be found online at laurentarshis.com.

Praise for I Survived the American Revolution, 1776:

Praise for I Survived the Destruction of Pompeii, AD 79:

"Tarshis serves up another gripping adventure... with the light-speed pacing and death-defying maneuvering fans have come to expect." -- Booklist

Praise for I Survived the Battle of Gettysburg, 1863:

Praise for I Survived Hurricane Katrina, 2005:

"Expressive illustrations capture the drama of the storm and its aftermath, but the book's real power comes from its exploration of what it means to be a hero." -- Booklist

Praise for I Survived the Shark Attacks of 1916:

"A gripping story that will hold the interest of reluctant readers." -- School Library Journal

Praise for I Survived the Sinking of the Titanic, 1912:

This feature require that you enable JavaScript in your browser.
END_OF_DOCUMENT_TOKEN_TO_BE_REPLACED

This feature require that you enable JavaScript in your browser.
END_OF_DOCUMENT_TOKEN_TO_BE_REPLACED

This feature require that you enable JavaScript in your browser.
END_OF_DOCUMENT_TOKEN_TO_BE_REPLACED