Out in the Wild!: A Graphix Chapters Book (Bug Scouts #1) (Paperback) 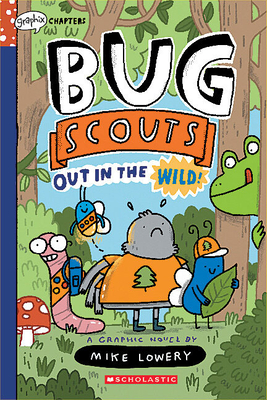 "Raise your leg or antenna, and make the BUG SCOUT pact:

Or make a cool web, or roll into a ball.

I pledge to be brave and adventurous too.

And do all of the things that bugs like to do!"

Meet Doug, Abby, and Josh: the BUG SCOUTS! Doug and Abby love everything about being Bug Scouts: their super-duper top-secret headquarters, earning bug badges, wearing scout gear, and, of course, snacks. Josh, meanwhile, is a grump and doesn’t like anything (except the snacks). The Bug Scouts begin to work on earning the "foraging" bug badge, which they can only get if they successfully find an edible plant. Together, they head into the woods in search for adventure and something to eat. But will they be able to avoid the poisonous plants and manage to not get eaten by a clever frog?!

With laugh-out-loud humor, puns galore, kid-friendly artwork, and endless heart, Bug Scouts is the perfect early graphic novel series for enthusiasts of Dog Man, Narwhal and Jelly, and CatStronauts. So get on your hiking boots, put on your binoculars, and head into wacky adventures with THE BUG SCOUTS.

Get drawn into reading with Graphix Chapters!

Mike Lowery is a New York Times bestselling illustrator who has worked on dozens of award-winning books for kids, including The Gingerbread Man Loose in the School, Mac B., Kid Spy by Mac Barnett, How to Be a T. Rex, and many others. He's also written several books, including the Doodle Adventures series of graphic novels for kids and Random Illustrated Facts: A Collection of Curious, Weird, and Totally Not Boring Things to Know, which collects his drawings of super-weird and totally true facts. Visit him online at mikelowery.com.

Selected by the Chicago Public Library as one of 2022’s Best Fiction for Young Readers!

* “With swarms of goofy jokes and adorable characters, the brief chapters fly by. Readers will most certainly be willing to affirm the first line of the Official Bug Scout Oath: “All bugs are awesome and that is a fact.”” -- Publishers Weekly, starred review

Selected by the Chicago Public Library as one of 2022’s Best Fiction for Young Readers!

Praise for Everything Awesome About Sharks and Other Underwater Creatures:

"In the wake of Everything Awesome About Dinosaurs and Other Prehistoric Beasts! (2019), Lowery spins out likewise frothy arrays of facts and observations about sharks, whales, giant squid, and smaller but no less extreme (or at least extremely interesting) sea life... An immersive dunk into a vast subject-and on course for shorter attention spans." -- Kirkus Reviews

Praise for Everything Awesome About Dinosaurs and Other Prehistoric Beasts:

* "Lowery sandwiches a populous parade of very simply drawn dinos between a history of prehistory and a roundup of diverse topics, from what paleontologists do to sets of dinosaur jokes and A Few Kinda Weird (and Unlikely!) Dino Extinction Theories... though true dinosaurs hold the spotlight, flying and marine reptiles, early mammals, and other fabulous early fauna take such frequent star turns that along with infobites galore, readers will come away with a fairly sound understanding of just how dinosaurs fit into the whole history of life on this planet... A manic but solid series kickoff." -- Kirkus Reviews, starred review

"Barnett and Lowery team up again in this second outing of international espionage mystery with royal overtones... this is a nifty mystery for young readers and a worthy sequel to the first." -- Kirkus Reviews

* "Barnett and Lowery bring the funny to the serious art of espionage in a perfect interplay of text and illustration...Barnett interweaves tidbits of global history fit for trivia lovers, while Lowery's comic-style images play a key role in the humor...Told with a sense of nostalgia for 1980s history and pop culture, the silliness and originality of this book will hook young readers." -- School Library Journal, starred review

This feature require that you enable JavaScript in your browser.
END_OF_DOCUMENT_TOKEN_TO_BE_REPLACED

This feature require that you enable JavaScript in your browser.
END_OF_DOCUMENT_TOKEN_TO_BE_REPLACED

This feature require that you enable JavaScript in your browser.
END_OF_DOCUMENT_TOKEN_TO_BE_REPLACED