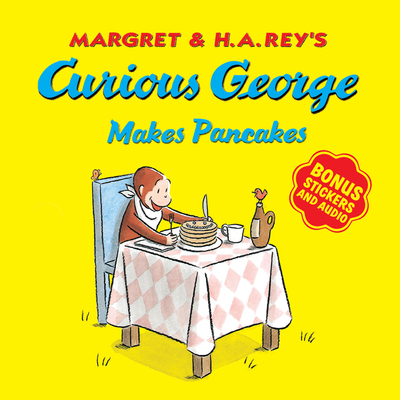 George and the man with the yellow hat attend the pancake breakfast fundraiser. Always curious, George finds his way to the pancake table to get into some monkey mischief! With stickers, bonus activities, and downloadable audio.

Every year, George and the man with the yellow hat attend a pancake breakfast to benefit the children’s hospital. Always curious, George finds his way to the pancake table and helps out. Pouring batter and flipping the pancakes over looks like fun! George decides to make some pancakes of his own, and after making and serving some of the most delicious pancakes the crowd has ever seen, George gets into even more monkey mischief.

H. A. Rey (1898–1977) was born in Hamburg, Germany, near the world-famous Hagenbeck Zoo, and developed a lifelong love for animals and drawing. He and his wife, Margret (1906–1996), who studied art at the acclaimed Bauhaus school, had many pets—including two marmoset monkeys that joined them on one of their steamship journeys across the Atlantic. Hans and Margret’s world-famous curious monkey first appeared in a manuscript strapped to their bicycles as they fled wartime Paris for the safety of the United States. Committed philanthropists in their own lives, a portion of proceeds from each Curious George book sold flows to the Curious George Foundation, which funds programs for children that encourage inquisitiveness in learning and exploring. Curious George has been successfully adapted into a major motion picture and an Emmy-winning television show on PBS.www.curiousgeorge.com.

This feature require that you enable JavaScript in your browser.
END_OF_DOCUMENT_TOKEN_TO_BE_REPLACED

This feature require that you enable JavaScript in your browser.
END_OF_DOCUMENT_TOKEN_TO_BE_REPLACED

This feature require that you enable JavaScript in your browser.
END_OF_DOCUMENT_TOKEN_TO_BE_REPLACED