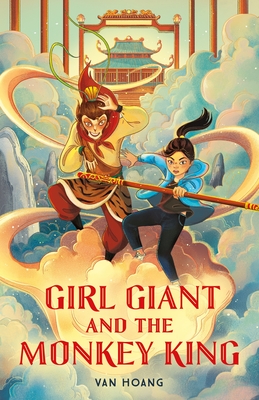 From debut author Van Hoang comes Girl Giant and the Monkey King, a tale packed with magic, adventure, and middle-school woes—perfect for fans of Rick Riordan and Roshani Chokshi.

Eleven-year-old Thom Ngho is keeping a secret: she’s strong. Like suuuuper strong. Freakishly strong. And it’s making it impossible for her to fit in at her new middle school.

In a desperate bid to get rid of her super strength, Thom makes a deal with the Monkey King, a powerful deity and legendary trickster she accidentally released from his 500-year prison sentence. Thom agrees to help the Monkey King get back his magical staff if he'll take away her strength.

Soon Thom is swept up in an ancient and fantastical world in where demons, dragons, and Jade princesses actually exist. But she quickly discovers that magic can’t cure everything, and dealing with the trickster god might be more trouble than it’s worth.

Van Hoang earned her bachelor’s degree in English at the University of New Mexico and her master’s in Library Information Science at San Jose State University. Girl Giant and the Monkey King was her debut novel. She was born in Vietnam, grew in up Orange County, California, and now resides in Los Angeles with her husband, kid, and two dogs.

"Debut author Hoang’s fast-paced fantasy is sure to resonate with middle-grade readers as Thom navigates the difficulties of making friends, facing bullying, and handling the insecurities that sometimes come along with being from a culture that’s unfamiliar to others." —Booklist, starred review

"This entertaining blend of the mundane and fantastical is packed with emotion and sure to strike a chord with readers." —Publishers Weekly, starred review

"Girl Giant and the Monkey King is the best kind of fantasy­ compelling in equal parts because of the magic and adventure and the heart of the characters." —Amber Reed of Copperfield's Books

"A tale that deals with important issues of fitting in and cultural understanding, while soaring into the realms of myth and magical adventure." —School Library Journal

This feature require that you enable JavaScript in your browser.
END_OF_DOCUMENT_TOKEN_TO_BE_REPLACED

This feature require that you enable JavaScript in your browser.
END_OF_DOCUMENT_TOKEN_TO_BE_REPLACED

This feature require that you enable JavaScript in your browser.
END_OF_DOCUMENT_TOKEN_TO_BE_REPLACED