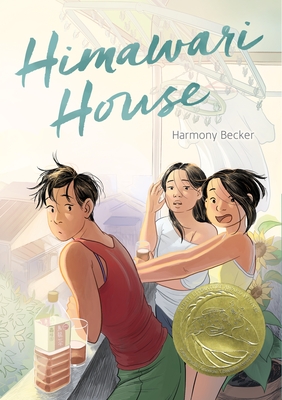 A young adult graphic novel about three foreign exchange students and the pleasures, and difficulties, of adjusting to living in Japan.

Living in a new country is no walk in the park—Nao, Hyejung, and Tina can all attest to that. The three of them became fast friends through living together in the Himawari House in Tokyo and attending the same Japanese cram school. Nao came to Japan to reconnect with her Japanese heritage, while Hyejung and Tina came to find freedom and their own paths. Though each of them has her own motivations and challenges, they all deal with language barriers, being a fish out of water, self discovery, love, and family.

Harmony Becker was born in Cincinnati, Ohio. She is the illustrator of George Takei's graphic memoir They Called Us Enemy. She currently lives in Mexico City.

"There is humor and charm in the intersection of languages and understandings. Harmony Becker's story resonates with humanity and deep wisdom. Himawari House is a tantalizing peek into the future of our global society." — George Takei, author of New York Times-bestseller They Called Us Enemy

"Becker’s art is intricate and rich at times, quick and playful at others. The story will tug at your heartstrings and make you laugh. All told, “Himawari House” will comfort young readers who are imagining their lives ahead and trigger nostalgic joy in older readers looking back." —New York Times

"This emotionally and culturally rich YA story that puts the author's range of talents on full display...adventures rendered with a masterful hand and an impressive ear for dialogue." —Washington Post

"This work exemplifies what the graphic novel format can achieve. An unforgettable story of personal growth in an exquisitely rendered setting." —Kirkus, starred review

"[Becker] makes her stupendous solo debut in what will prove to one of the best graphic titles of the year....Audiences can expect absolute delight." —Booklist, starred review

"...An immersive graphic novel that explores cross-cultural identity and the power of language to separate and to unite." —The Bulletin of the Center for Children's Books, starred review

"In this stunningly layered graphic novel debut, Becker crafts a warmly actualized world in which the multiplicities of diasporic Asian identity are examined and held close." —Publisher's Weekly, starred review

"Both hilarious and tender situations abound as this insightful graphic novel explores, among other topics, how language can either separate or bring people together." —Horn Book, starred review

This feature require that you enable JavaScript in your browser.
END_OF_DOCUMENT_TOKEN_TO_BE_REPLACED

This feature require that you enable JavaScript in your browser.
END_OF_DOCUMENT_TOKEN_TO_BE_REPLACED

This feature require that you enable JavaScript in your browser.
END_OF_DOCUMENT_TOKEN_TO_BE_REPLACED