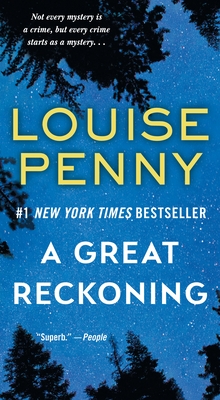 This is book number 12 in the Chief Inspector Gamache Novel series.

“There is something rotten at the Surete academy, and the now-retired Chief Inspector Armand Gamache has been brought in to clean it up. In the meantime, a strange map has been found in Three Pines. Old friends, new characters, murder, and history combine in another irresistible tale from Penny, whose writing is always compassionate, funny, and literate. This latest in the series is not to be missed.”
— Kathy Magruder (W), Pageturners Bookstore, Indianola, IA

"Deep and grand and altogether extraordinary....Miraculous."
—The Washington Post

“A Great Reckoning succeeds on every level."
—St. Louis Post-Dispatch

When an intricate old map is found stuffed into the walls of the bistro in Three Pines, it at first seems no more than a curiosity. But the closer the villagers look, the stranger it becomes.

Given to Armand Gamache as a gift the first day of his new job, the map eventually leads him to shattering secrets. To an old friend and older adversary. It leads the former Chief of Homicide for the Sûreté du Québec to places even he is afraid to go. But must.

And there he finds four young cadets in the Sûreté academy, and a dead professor. And, with the body, a copy of the old, odd map.

Everywhere Gamache turns, he sees Amelia Choquet, one of the cadets. Tattooed and pierced. Guarded and angry. Amelia is more likely to be found on the other side of a police line-up. And yet she is in the academy. A protégée of the murdered professor.

The focus of the investigation soon turns to Gamache himself and his mysterious relationship with Amelia, and his possible involvement in the crime. The frantic search for answers takes the investigators back to Three Pines and a stained glass window with its own horrific secrets.

For both Amelia Choquet and Armand Gamache, the time has come for a great reckoning.

This edition of the book is the deluxe, tall rack mass market paperback.

LOUISE PENNY is the author of the #1 New York Times, USA Today, and Globe and Mail bestselling series of Chief Inspector Armand Gamache novels, and coauthor with Hillary Rodham Clinton of the #1 New York Times bestselling thriller State of Terror. She has won numerous awards, including a CWA Dagger and the Agatha Award (seven times), and was a finalist for the Edgar Award for Best Novel. In 2017, she received the Order of Canada for her contributions to Canadian culture. Louise lives in a small village south of Montréal.

"Deep and grand and altogether extraordinary....Miraculous."
—The Washington Post

“A Great Reckoning succeeds on every level."
—St. Louis Post-Dispatch

"Louise Penny [is] legendary... The magic of Penny’s books lies in the details."
—BookPage

"This complex novel deals with universal themes of compassion, weakness in the face of temptation, forgiveness, and the danger of falling into despair and cynicism over apparently insurmountable evils."
—Publishers Weekly (starred and boxed)

"A compelling mystery and a rich human drama in which no character is either entirely good or evil, and each is capable of inspiring empathy."
—Booklist (starred)

"Riveting...with characters of incredible depth who only add to the strength of the plot."
—Library Journal (starred)

Additional Praise for Louise Penny and the Armand Gamache Mysteries

“Louise Penny is unsurpassed at building a sense of heart-stopping urgency."
—The Charlotte Observer

“Penny, who raises the bar with each entry in this superb series, has always mixed murder and corruption with issues of morality...[S]he does so with her accustomed talent for a gripping plot, rich characterizations, arresting prose and thought-provoking questions of mercy, malice and the contradictions of the human race." —Richmond-Times Dispatch

“Penny writes with grace and intelligence about complex people struggling with complex emotions. But her great gift is her uncanny ability to describe what might seem indescribable – the play of light, the sound of celestial music, a quiet sense of peace.”
—New York Times Book Review

This feature require that you enable JavaScript in your browser.
END_OF_DOCUMENT_TOKEN_TO_BE_REPLACED

This feature require that you enable JavaScript in your browser.
END_OF_DOCUMENT_TOKEN_TO_BE_REPLACED

This feature require that you enable JavaScript in your browser.
END_OF_DOCUMENT_TOKEN_TO_BE_REPLACED