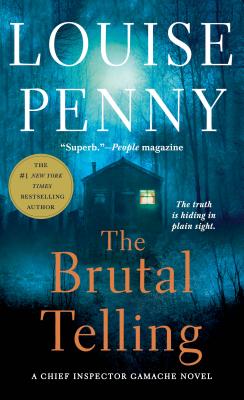 By Louise Penny
$8.99
Email or call for price

This is book number 5 in the Chief Inspector Gamache Novel series.

“Louise Penny just keeps getting better and better. In her latest installment in the Chief Inspector Gamache series, she creates a satisfying read that is impossible to put down. Once again in the remote Canadian village of Three Pines, Gamache's team is summoned when an unknown dead man is found in the town's favorite bistro. Gamache searches near and far to unravel the mystery, yet the most intriguing journey is the one into the killer's mind.”
— Sally Morrison, Sierra Madre Books, Sierra Madre, CA

With those words the peace of Three Pines is shattered. Everybody goes to Olivier's Bistro—including a stranger whose murdered body is found on the floor. When Chief Inspector Gamache is called to investigate, he is dismayed to discover that Olivier's story is full of holes. Why are his fingerprints all over the cabin that's uncovered deep in the wilderness, with priceless antiques and the dead man's blood? And what other secrets and layers of lies are buried in the seemingly idyllic village?

Gamache follows a trail of clues and treasures—from first editions of Charlotte's Web and Jane Eyre to a spiderweb with a word mysteriously woven in it—into the woods and across the continent, before returning to Three Pines to confront the truth and the final, brutal telling.

LOUISE PENNY is the author of the #1 New York Times, USA Today, and Globe and Mail bestselling series of Chief Inspector Armand Gamache novels, and coauthor with Hillary Rodham Clinton of the #1 New York Times bestselling thriller State of Terror. She has won numerous awards, including a CWA Dagger and the Agatha Award (eight times), and was a finalist for the Edgar Award for Best Novel. In 2017, she received the Order of Canada for her contributions to Canadian culture. Louise lives in a small village south of Montréal.

“Penny has been compared to Agatha Christie, and while there is a surface resemblance there, it sells her short. Her characters are too rich, her grasp of nuance and human psychology too firm for the formula-bound Christie. No, Penny belongs in the hands of those who read not only P. D. James but also Donna Leon, who, like Penny, mixes her hero’s family and professional lives fluidly and with a subtle grasp of telling detail.” –Booklist (starred)

This superb novel will appeal to readers who enjoy sophisticated literary mysteries in the tradition of Donna Leon.” –Library Journal (starred)

Penny is a world-class storyteller. If you don’t want to move to Montreal with Gamache as your neighbor—or better yet, relocate to Three Pines and be welcomed into its community of eccentrics—you have sawdust in your veins, which must be very uncomfortable.” –Kirkus Reviews

Additional Praise for Louise Penny and the Armand Gamache Mysteries

“Louise Penny is unsurpassed at building a sense of heart-stopping urgency." —The Charlotte Observer

“Penny, who raises the bar with each entry in this superb series, has always mixed murder and corruption with issues of morality...[S]he does so with her accustomed talent for a gripping plot, rich characterizations, arresting prose and thought-provoking questions of mercy, malice and the contradictions of the human race." —Richmond-Times Dispatch

“Penny writes with grace and intelligence about complex people struggling with complex emotions. But her great gift is her uncanny ability to describe what might seem indescribable – the play of light, the sound of celestial music, a quiet sense of peace.” —New York Times Book Review

This feature require that you enable JavaScript in your browser.
END_OF_DOCUMENT_TOKEN_TO_BE_REPLACED

This feature require that you enable JavaScript in your browser.
END_OF_DOCUMENT_TOKEN_TO_BE_REPLACED

This feature require that you enable JavaScript in your browser.
END_OF_DOCUMENT_TOKEN_TO_BE_REPLACED