When We Wuz Famous (Paperback) 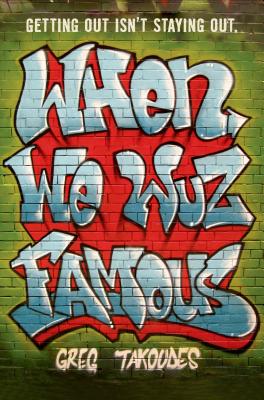 Francisco Ortiz, a handsome straight-A student and gifted basketball player from the barrio, wins a full scholarship to an elite boarding school. His future seems promising. But soon after Francisco moves into the dorm, his new classmates assume the worst of him: they pepper him with questions about drugs and gangs. It's all so confusing, made even more complicated when Francisco realizes that back home in the hood, he no longer fits in, though his friends still rely on him to solve their problems. In a desperate attempt to help one of his homies, Francisco makes a terrible decision and becomes everything he fought so hard to rise against.
In When We Wuz Famous, Greg Takoudes has written a riveting novel about breaking down stereotypes, crossing boundaries, and clinging to where you come from.

Greg Takoudes is an author and filmmaker whose feature film, Up with Me—which inspired his first novel, When We Wuz Famous—won several awards, including the Special Jury Award at South by Southwest, and was distributed by IFC Films.  Prior to moving to New York, he worked for Ron Howard and Brian Grazer as a member of the creative team at Imagine Entertainment in Los Angeles. Greg lives in Brooklyn with his wife and two children.

“Intense and determinedly realistic, this story will leave a lasting impression on readers.” —Publishers Weekly

This feature require that you enable JavaScript in your browser.
END_OF_DOCUMENT_TOKEN_TO_BE_REPLACED

This feature require that you enable JavaScript in your browser.
END_OF_DOCUMENT_TOKEN_TO_BE_REPLACED

This feature require that you enable JavaScript in your browser.
END_OF_DOCUMENT_TOKEN_TO_BE_REPLACED