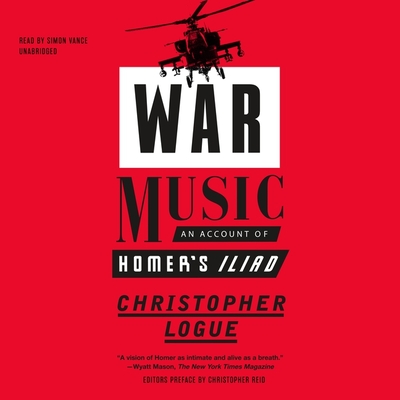 A remarkable hybrid of translation, adaptation, and invention

Picture the east Aegean sea by night, And on a beach aslant its shimmeringUpwards of 50,000 menAsleep like spoons beside their lethal Fleet.

"Your life at every instant up for― / Gone. / And, candidly, who gives a toss? / Your heart beats strong. Your spirit grips," writes Christopher Logue in his original version of Homer's Iliad, the uncanny "translation of translations" that won ecstatic and unparalleled acclaim as "the best translation of Homer since Pope's" (New York Review of Books).

Logue's account of Homer's Iliad is a radical reimagining and reconfiguration of Homer's tale of warfare, human folly, and the power of the gods in language and verse that is emphatically modern and "possessed of a very terrible beauty" (Slate). Illness prevented him from bringing his version of the Iliad to completion, but enough survives in notebooks and letters to assemble a compilation that includes the previously published volumes War Music, Kings, The Husbands, All Day Permanent Red, and Cold Calls, along with previously unpublished material, in one final illuminating volume arranged by his friend and fellow poet Christopher Reid. The result, War Music, comes as near as possible to representing the poet's complete vision and confirms what his admirers have long known: that "Logue's Homer is likely to endure as one of the great long poems of the twentieth century" (Times Literary Supplement).

This feature require that you enable JavaScript in your browser.
END_OF_DOCUMENT_TOKEN_TO_BE_REPLACED

This feature require that you enable JavaScript in your browser.
END_OF_DOCUMENT_TOKEN_TO_BE_REPLACED

This feature require that you enable JavaScript in your browser.
END_OF_DOCUMENT_TOKEN_TO_BE_REPLACED