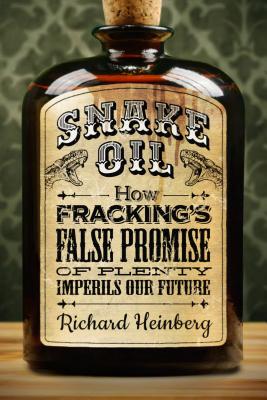 By Richard Heinberg
$12.95
Email or call for price

The rapid spread of hydraulic fracturing ( fracking ) has temporarily boosted US natural gas and oil production . . . and sparked a massive environmental backlash in communities across the country. The fossil-fuel industry is trying to sell fracking as the biggest energy development of the century, with slick promises of American energy independence and benefits to local economies. Snake Oil casts a critical eye on the oil-industry hype that has hijacked America's energy conversation. This is the first book to look at fracking from both economic and environmental perspectives, informed by the most thorough analysis of shale gas and oil drilling data ever undertaken. Is fracking the miracle cure-all to our energy ills, or a costly distraction from the necessary work of reducing our fossil-fuel dependence?

RICHARD HEINBERG is the award-winning author of ten previous books including THE PARTY'S OVER, POWERDOWN, and THE END OF GROWTH. A Senior Fellow at Post Carbon Institute, he is one of the world's foremost energy educators and communicators about the urgent need to transition away from fossil fuels. He is a recipient of the M. King Hubbert award for excellence in energy education and since 2002 has given over five hundred lectures on fossil fuel depletion to audiences around the world. He has been published in 'Nature, ' the world's premiere scientific journal; he has been quoted in 'Time' magazine and other major publications; and he has been interviewed on national radio and television in seven countries.

This feature require that you enable JavaScript in your browser.
END_OF_DOCUMENT_TOKEN_TO_BE_REPLACED

This feature require that you enable JavaScript in your browser.
END_OF_DOCUMENT_TOKEN_TO_BE_REPLACED

This feature require that you enable JavaScript in your browser.
END_OF_DOCUMENT_TOKEN_TO_BE_REPLACED