The Men: A Lyric Book (Paperback) 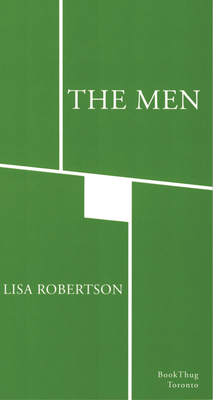 In Vancouver as the dark winter tapered into springI undertook to singMy life my body these wordsThe men from a perspective.The Men is a work that will be both familiar and fresh to anyone who has read Lisa Robertson. As a poet Robertson has received unrivaled praise for her uncompromising intelligence and style. The Men will not only compliment her previous work, but will add a new layer as a far more personal and lyrical book than anything she has yet published. Who are the men? The Menare a riddle. What do they want? Their troubles become lyric. The Men explores a territory between the poet and a lyric lineage among men. Following a tradition that includes Petrarchï¿½s Sonnets, Cavalcanti, Danteï¿½s works on the vernacular, Montaigne, and even Kant, Robertson is compelled towards the construction of the textual subjectivity these authors convey - a subjectivity that honours all the ambivalence, doubt, and tenderness of the human. Yet she remains angered by the structure of gender these works advance. It is this troubled texture of identification that she examines in The Men. How does a woman of the present century see herself, in menï¿½s lyric texts of the renaissance, in the tradition of the philosophy of the male subject, as well as in the men that surround her, obfuscating, dear, idiotic and gorgeous as they often seem? What if ï¿½sheï¿½ wrote ï¿½hisï¿½ poems? At once intimate and oblique, humorous and heartbreaking, composed and furious, - The Men seeks to defamiliarize both who, and what men are.

Born in Toronto, Lisa Robertson moved to British Columbia in 1979, first to Saltspring Island; later to Vancouver. A regular contributor to Nest and a longstanding member of the Kootenay School of Writing Collective, she has worked as a bookseller, an editor and as an art and cultural critic. In addition, she teaches poetry workshops, presents talks about contemporary poetics and has served on the board of Artspeak Gallery. She currently lives in France.

This feature require that you enable JavaScript in your browser.
END_OF_DOCUMENT_TOKEN_TO_BE_REPLACED

This feature require that you enable JavaScript in your browser.
END_OF_DOCUMENT_TOKEN_TO_BE_REPLACED

This feature require that you enable JavaScript in your browser.
END_OF_DOCUMENT_TOKEN_TO_BE_REPLACED