From the Belly of My Beauty (Sun Tracks #38) (Paperback) 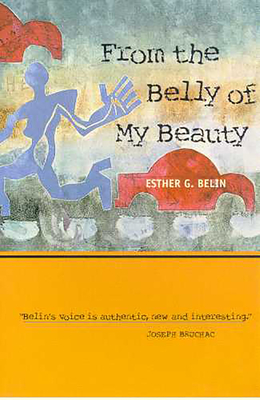 This is book number 38 in the Sun Tracks series.

If it can be said that Native culture is hidden behind the facade of mainstream America, there is a facet of that culture hidden even to many Native Americans. One of today's generation of outstanding Native writers, Esther Belin is an urban Indian. Raised in the city, she speaks with an entirely different voice from that of her reservation kindred as she expresses herself on subjects of urban alienation, racism, sexism, substance abuse, and cultural estrangement.

In this bold new collection of poems, Belin presents a startling vision of urban California—particularly Los Angeles—contrasted with Navajo life in the Four Corners region. She presents aspects of Diné life and history not normally seen by readers accustomed to accounts written by Navajos brought up on the reservation.

Her work reveals a difference in experience but a similarity in outlook. Belin's poems put familiar cultural forms in a new context, as Coyote "struts down east 14th / feeling good / looking good / feeling the brown." Her character Ruby dramatizes the gritty reality of a Native woman's life ("I laugh / sit / smoke a Virginia Slim / and talk to the spirits"). Her use of Diné language and poignant descriptions of family life will remind some of Joy Harjo's work, but with every turn of the page, readers will know that Belin is making her own mark on Native American literature.

From the Belly of My Beauty is also a ceremony of affirmation and renewal for those Native Americans affected by the Federal Indian Relocation Program of the 1950s and '60s, with its attempts to "assimilate" them into the American mainstream. They have survived by remembering who they were and where they came from. And they have survived so that they might bear witness, as Esther Belin so powerfully does. Belin holds American culture accountable for failing to treat its indigenous peoples with respect, but speaks for the ability of Native culture to survive and provide hope, even for mixed-blood or urban Indians. She is living proof that Native culture thrives wherever its people are found.

Winner of the American Book Award

"The words are gut-wrenching, authentic, laugh-out loud funny, meditative, and will move you to tears. She is the real thing!" —Irvin Morris, author of From the Glittering World

This feature require that you enable JavaScript in your browser.
END_OF_DOCUMENT_TOKEN_TO_BE_REPLACED

This feature require that you enable JavaScript in your browser.
END_OF_DOCUMENT_TOKEN_TO_BE_REPLACED

This feature require that you enable JavaScript in your browser.
END_OF_DOCUMENT_TOKEN_TO_BE_REPLACED