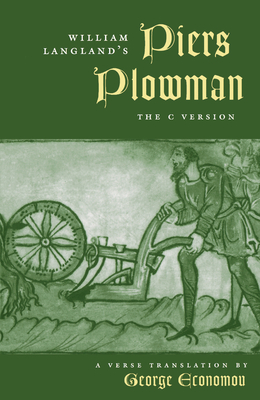 William Langland's Piers Plowman is one of the major poetic monuments of medieval England and of world literature. Probably composed between 1372 and 1389, the poem survives in three distinct versions. It is known to modern readers largely through the middle of the three, the so-called B-text. Now, George Economou's verse translation of the poet's third version makes available for the first time in modern English the final revision of a work that many have regarded as the greatest Christian poem in our language.

Langland's remarkable powers of invention and his passionate involvement with the spiritual, social, and political crises of his time lay claim to our attention, and demand serious comparison with Dante's Divine Comedy. Economou's translation preserves the intensity of the poet's verse and the narrative energy of his alliterative long line, the immediacy of the original's story of the quest for salvation, and the individuality of its language and wordplay.

George Economou is Professor of English at the University of Oklahoma in Norman. He is the author of The Goddess Natura in Medieval Literature. Among his books of poetry are Landed Natures; Ameriki: Book One and Selected Earlier Poems; and harmonies and fits.

This feature require that you enable JavaScript in your browser.
END_OF_DOCUMENT_TOKEN_TO_BE_REPLACED

This feature require that you enable JavaScript in your browser.
END_OF_DOCUMENT_TOKEN_TO_BE_REPLACED

This feature require that you enable JavaScript in your browser.
END_OF_DOCUMENT_TOKEN_TO_BE_REPLACED