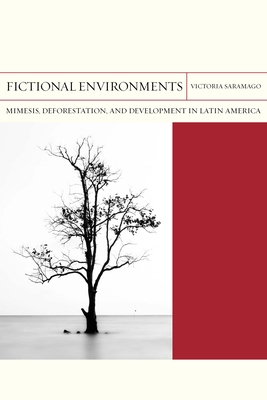 By Victoria Saramago
Email or call for price and availability

Fictional Environments: Mimesis, Deforestation, and Development in Latin America investigates how fictional works have become sites for the production of knowledge, imagination, and intervention in Latin American environments. It investigates the dynamic relationship between fictional images and real places, as the lasting representations of forests, rural areas, and deserts in novels clash with collective perceptions of changes like deforestation and urbanization.

From the backlands of Brazil to a developing Rio de Janeiro, and from the rainforests of Venezuela and Peru to the Mexican countryside, rapid deforestation took place in Latin America in the second half of the twentieth century. How do fictional works and other cultural objects dramatize, resist, and intervene in these ecological transformations? Through analyses of work by João Guimarães Rosa, Alejo Carpentier, Juan Rulfo, Clarice Lispector, and Mario Vargas Llosa, Victoria Saramago shows how novels have inspired conservationist initiatives and offered counterpoints to developmentalist policies, and how environmental concerns have informed the agendas of novelists as essayists, politicians, and public intellectuals. This book seeks to understand the role of literary representation, or mimesis, in shaping, sustaining, and negotiating environmental imaginaries during the deep, ongoing transformations that have taken place from the 1950s to the present.

VICTORIA SARAMAGO is an assistant professor of Hispanic and Luso-Brazilian studies at the University of Chicago.

“Saramago gives a new twist to long-standing discussions about the status and function of fictional texts in environmental discourse and criticism, and whether realist and documentary modes are most appropriate for literature on environmental change. Ultimately, her innovative book engages with the more fundamental question of whether fictionality in and of itself gets in the way of ‘environmental messaging.’” —Ursula K. Heise, author of Imagining Extinction: The Cultural Meanings of Endangered Species

“Fictional Environments: Mimesis and Deforestation in Latin America makes an important and novel contribution to both Latin American literary history and to environmental humanities independently, and specifically to the incipient but expanding field of Latin American ecocriticism.” —Rachel Price, author of The Object of the Atlantic: Concrete Aesthetics in Cuba, Brazil and Spain 1868-1968 (Northwestern, 2014)

“Wide-ranging, starkly original, and sharp, Fictional Environments is full of brilliant insights on the multiple relationships between writing and ecologies. While revisiting canonical texts and bringing together critical traditions often kept apart, Saramago sheds new light on our understanding of conservation, development, and the rights of nature and fiction, in Latin America and beyond. The book never loses sight of what’s at stake as it reflects on the limits and possibilities of literary creation amid ongoing environmental devastation.” —Bruno Carvalho, author of Porous City: A Cultural History of Rio de Janeiro

This feature require that you enable JavaScript in your browser.
END_OF_DOCUMENT_TOKEN_TO_BE_REPLACED

This feature require that you enable JavaScript in your browser.
END_OF_DOCUMENT_TOKEN_TO_BE_REPLACED

This feature require that you enable JavaScript in your browser.
END_OF_DOCUMENT_TOKEN_TO_BE_REPLACED