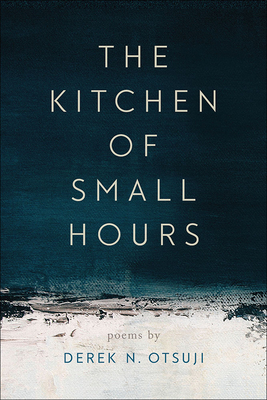 In The Kitchen of Small Hours, Derek N. Otsuji embraces the fragility and endurance of a family of immigrants from two prefectures in Japan: Kagoshima in the south and Okinawa, an island more than four hundred miles from the mainland. In these poems, five generations sing, save, scold, bury, and cook against the culture and history that emerged from the pineapple and sugar cane plantations of mid-nineteenth-century Hawaii, from the bomb-scapes and hatreds of World War II, and from the canning and tourism industry of the twentieth century. Otsuji writes of how his family used stories and rugged cheer to fill the spaces apart from the cane fields and the canning factory. Their recipes, rituals, celebrations, songs, dances, myths, and family stories passed from grandmother to father to son, who folds them into lyrics.

Here too are whispers, failures, and traceable absences: a face removed from photos, a love silenced to be acceptable, a dead firstborn housed in an urn. There are things that no one intended to give. Otsuji’s language hungers for them anyway. The haunting reunions between author and ancestor sink just as deep as roots and hold just as fast. The cooking pot, the family photo, the moon recur as images that feed and comfort. Lyrical and warm, Otsuji’s voice sounds out a sinew of words that make the remnants of heritage and home durable. In these poems each new generation seeks to reimagine for itself the elusive American Dream

Derek N. Otsuji, an associate professor of English at Honolulu Community College, was awarded the 2019 Tennessee Williams Scholarship from the Sewanee Writers’ Conference. He received the Editor’s Choice Award for poems published in the fortieth-anniversary issue of Bamboo Ridge, the longest running independent literary journal in Hawaii. His poems have appeared in Rhino, Missouri Review, Indiana Review, Pleiades, and the Threepenny Review.

“Derek N. Otsuji’s The Kitchen of Small Hours is largely an exercise in honoring the dead. Moving lyrics pop off the page, propelled by the momentum of the past.”—Chris McKinney, author of The Tattoo and Midnight, Water City

“The Kitchen of Small Hours proves what many fans of Otsuji already knew: he is one of the most talented poets currently writing in Hawaiʻi. This beautifully crafted book casts an ‘inner light’ on family and food, culture and tradition, death and dreams. Like ‘ink brushed on rice paper,’ these words reveal truths that only poetry ‘gives us eyes to see.’”—Craig Santos Perez, author of Habitat Threshold

“Otsuji welcomes us into a multigenerational world of family, history, parables, work songs, and secrets—where conversations with the dead intertwine with the rituals of the living. This is a book steeped in love and attention, one that recognizes that ‘the bombed station, the sea of pleading / eyes, the cool of the river grass’ inevitably bring loss, though we are instructed: ‘Don’t grieve, says the light. Tangerines / like goldfish swim in their groves. Nothing is lost.’ There is a sweetness and reverence here that is rare in contemporary poetry. It is something the body can experience only in the reading, something layered into the word love—as we glimpse an entire century of life and more within Otsuji’s The Kitchen of Small Hours.”—Brian Turner, author of Here, Bullet

This feature require that you enable JavaScript in your browser.
END_OF_DOCUMENT_TOKEN_TO_BE_REPLACED

This feature require that you enable JavaScript in your browser.
END_OF_DOCUMENT_TOKEN_TO_BE_REPLACED

This feature require that you enable JavaScript in your browser.
END_OF_DOCUMENT_TOKEN_TO_BE_REPLACED