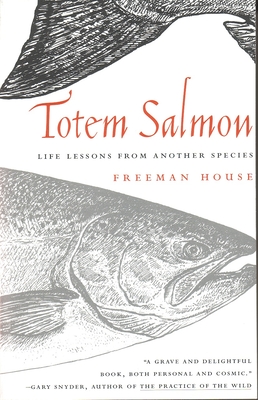 By Freeman House
Email or call for price and availability

Part lyrical natural history, part social and philosophical manifesto, Totem Salmon tells the story of a determined band of locals who've worked for over two decades to save one of the last purely native species of salmon in California. The book-call it the zen of salmon restoration-traces the evolution of the Mattole River Valley community in northern California as it learns to undo the results of rapacious logging practices; to invent ways to trap wild salmon for propagation; and to forge alliances between people who sometimes agree on only one thing-that there is nothing on earth like a Mattole king salmon.

House tells the story of the annual fishing rituals of the indigenous peoples of the Klamath River in northern California, one that relies on little-known early ethnographic studies and on indigenous voices-a remarkable story of self-regulation that unites people and place. And his riffs on the colorful early history of American hatcheries, on property rights, and on the "happiness of the state" show precisely why he's considered a West Coast visionary.

Petitions to list a dozen West Coast salmon runs under the provisions of the Endangered Species Act make saving salmon an issue poised to consume the Pacific West. "Never before, said Federal officials, has so much land or so many people been given notice that they will have to alter their lives to restore a wild species" (New York Times, 2/27/98). Totem Salmon is set to become the essential read for this newest chapter in our relations with other wild things.

Freeman House, a former commercial salmon fisherman, is cofounder of the Mattole Watershed Salmon Support Group and of the Mattole Restoration Council. He lives in Petrolia in the Mattole River Valley of northwestern California, and this is his first book.

A grave and delightful book, both personal and cosmic. --Gary Snyder, author of The Practice of the Wild

"Totem Salmon is both a lyric ode to a charismatic animal and a memoir of one man's claling to a regenerative life's work."
-Whole Earth Review

"Totem Salmon recounts the elaborate, sometimes cantankerous and always exhilarating story of one community's ongoing effort to return the bones -to honor the gifts of nature by giving something back." --Tim McNulty, Seattle Times

"A hopeful, inspirational, and ultimately riveting saga of a community taking action in the most fundamental, hands-on way."
-Outside

"With easy yet urgent prose, author Freeman House adds his name to the list of biologists and naturalists who work eloquently with metaphors and tirelessly for the protection of endangered species and habitats."
-New Age Journal

"House is a marvelous explainer of how things are and how they work and how, if you grasp the puzzle presented by . . . a native species of salmon, you might better understand yourself." --Barry Blake, North Coast Journal

"A marvelously vivid and thoughtful book."
-California Coast and Ocean

"This graceful book is a welcome gift."
-Coast Weekend

"Reading [House's] words, I feel I am returning to my own native element: rain flavored with cedar and the exact stone recipe that thrills me home. If a salmon can find clues this subtle, what are we not seeing yet?" --Kim Stafford, The Sunday Oregonian

"Here is the quintessential deep ecology book, with no mention of the controversial and ambiguous term." --Ken Otter, Deep Ecology News

"Totem Salmon, a lyrical meditation about place, binds together two epic journeys: one about humans, one about fish." --Michael Black, San Francisco Examiner-Chronicle

"Freeman House masterfully narrates the daily challenges that he and his cohorts have faced in trying to bring back a once almost extinct native Chinook salmon run, and places it all within a larger cultural and historical context." --Mike Helm, Express Books, East Bay Express

"Inspired and well-written . . . a terrific introduction to an ethic called 'bioregionalism.'"
-Publishers Weekly

This feature require that you enable JavaScript in your browser.
END_OF_DOCUMENT_TOKEN_TO_BE_REPLACED

This feature require that you enable JavaScript in your browser.
END_OF_DOCUMENT_TOKEN_TO_BE_REPLACED

This feature require that you enable JavaScript in your browser.
END_OF_DOCUMENT_TOKEN_TO_BE_REPLACED