Poems from the Río Grande, 14 (Paperback) 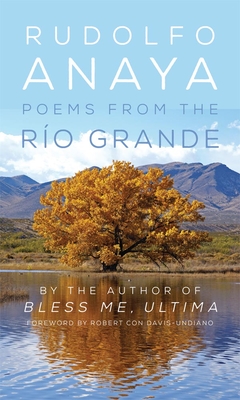 
Readers of Rudolfo Anaya's fiction know the lyricism of his prose, but most do not know him as a poet. In this, his first collection of poetry, Anaya presents twenty-eight of his best poems, most of which have never before been published. Featuring works written in English and Spanish over the course of three decades, Poems from the R o Grande offers readers a full body of work showcasing Anaya's literary and poetic imagination. Although the poems gathered here take a variety of forms--haiku, elegy, epic--all are imbued with the same lyrical and satirical styles that underlie Anaya's fiction. Together they make a fascinating complement to the novels, stories, and plays for which he is well known. In verse, Anaya explores every aspect of Chicano identity, beginning with memories of his childhood in a small New Mexico village and ending with mature reflections on being a Chicano who considers himself connected to all peoples. The collection articulates the themes at the heart of all Anaya's work: nostalgia for the landscape and customs of his boyhood in rural New Mexico, a deep connection to the R o Grande, the politics of Chicanismo and satire aimed at it, and the use of myth and history as metaphor. Anaya also illustrates his familiarity with world traditions of poetry, invoking Walt Whitman, Homer, and the Bible. The poem to Isis that concludes the collection honors Anaya's wife, Patricia, and reflects his increasing identification with spiritual traditions across the globe. Both profeta and vato, seer and homeboy, Anaya as author is a citizen of the world. Poems from the R o Grande offers readers a glimpse into his development as a poet and as one of the most celebrated Chicano authors of our time.

This feature require that you enable JavaScript in your browser.
END_OF_DOCUMENT_TOKEN_TO_BE_REPLACED

This feature require that you enable JavaScript in your browser.
END_OF_DOCUMENT_TOKEN_TO_BE_REPLACED

This feature require that you enable JavaScript in your browser.
END_OF_DOCUMENT_TOKEN_TO_BE_REPLACED