Institutes of the Christian Religion: Embracing Almost the Whole Sum of Piety, & Whatever is Necessary to Know of the Doctrine of Salvation: A Work Mo (Paperback) 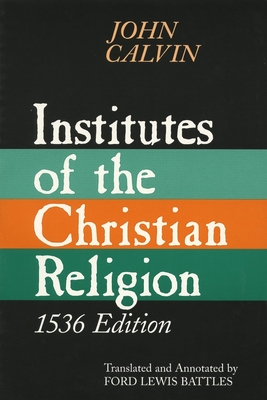 
John Calvin was just twenty-seven years old when the first edition of his Institutes was published in Basel in 1536. Building on the work of Erasmus and Luther, Calvin wrote with brilliance and passion of the many ways the church and its theology had been "deformed," and he presented a case for restoring the church and theology to its pristine purity. Calvin's "little book" -- as he affectionately called it -- grew in size through the rest of his life; eventually, this early, shorter version evolved into what is now known as the Institutes, the 1559 edition, which Calvin considered the authoritative form of his thought for posterity. Noted Calvin scholar Ford Lewis Battles translated the 1536 Institutes in 1975, after completing his masterful translation of the 1559 Institutes. This revised edition of Battles' translation is now being published in recognition of the four- hundred-fiftieth anniversary of the original publication of the 1536 Institutes. Intended both for readers who wish to gain a better understanding of this earliest expression of Calvin's theology and for scholars who may wish to pursue further research, this edition contains extensive notes and references. The book's four appendices include a new translation of Calvin's Preface to Oliv tan's Bible (1535); the five indices include an index of biblical references and a comparative table of the 1536 and 1559 Institutes. The numerous citations in the endnotes from the writings of Calvin's predecessors and contemporaries illuminate the significance of the text in its historical context.

John Calvin (1509-1564) One of the most influential reformers, his work was of significance throughout Europe and beyond. John Calvin was born in Noyon, France on July 10, 1509. His father was the secretary and attorney for the bishopric of Noyon. Calvin was a brilliant scholar and studied law in Paris, Orleans and Bourges. After what he called a "sudden conversion" at the age of 23, Calvin became a fervent Christian and scholar of the Scripture. Calvin did not immediately break with the Roman Catholic Church, but rather worked toward its reform. His pleas for reform soon brought upon him the hatred of the Catholic Church, and in time he was banished from Paris. Calvin fled to Switzerland, broke with the Catholic Church, and joined with the reformers. In 1536 he published his famous Institutes of the Christian Religion, which was a systematic presentation of the Protestant position. In 1559 he founded what later became the University of Geneva. Here he taught his beliefs to thousands of students who in turn carried "Calvinism" back to their homelands throughout Europe. John Calvin died in Geneva, Switzerland on May 27, 1564.

This feature require that you enable JavaScript in your browser.
END_OF_DOCUMENT_TOKEN_TO_BE_REPLACED

This feature require that you enable JavaScript in your browser.
END_OF_DOCUMENT_TOKEN_TO_BE_REPLACED

This feature require that you enable JavaScript in your browser.
END_OF_DOCUMENT_TOKEN_TO_BE_REPLACED