Under the Surface: Fracking, Fortunes, and the Fate of the Marcellus Shale (Hardcover) 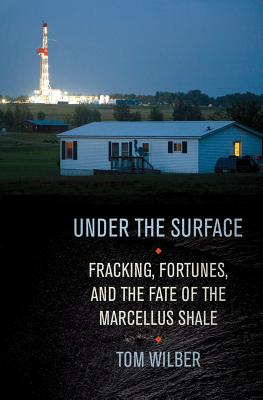 For the updated paperback edition of Under the Surface, Tom Wilber has written a new chapter and epilogue covering developments since the book's initial publication. Chief among these are the home rule movement and accompanying social and legal events leading up to an unprecedented ban of fracking in New York state, and the outcome of the federal EPA's investigation of water pollution just across the state border in Dimock, Pennsylvania. The industry, with powerful political allies, effectively challenged the federal government's attempts to intervene in drilling communities in Pennsylvania, Wyoming, and Texas with water problems. But it met its match in a grassroots movement known as "fractivism" that sprouted from seeds sown in upstate New York community halls and grew into one of the state's most influential environmental movements since Love Canal.

Wilber weaves a narrative tracing the consequences of shale gas development in northeast Pennsylvania and central New York through the perspective of various stakeholders. Wilber's evenhanded treatment explains how the revolutionary process of fracking has changed both access to our domestic energy reserves and the lives of people living over them.

He gives a voice to all constituencies, including farmers and landowners tempted by the prospects of wealth but wary of the consequences; policymakers struggling with divisive issues concerning free enterprise, ecology, and public health; and activists coordinating campaigns based on their respective visions of economic salvation and environmental ruin. Throughout the book, Wilber illustrates otherwise dense policy and legal issues in human terms and shows how ordinary people can affect extraordinary events.

This feature require that you enable JavaScript in your browser.
END_OF_DOCUMENT_TOKEN_TO_BE_REPLACED

This feature require that you enable JavaScript in your browser.
END_OF_DOCUMENT_TOKEN_TO_BE_REPLACED

This feature require that you enable JavaScript in your browser.
END_OF_DOCUMENT_TOKEN_TO_BE_REPLACED