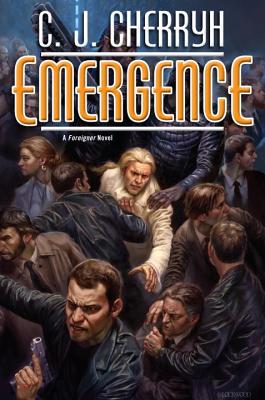 This is book number 19 in the Foreigner series.

The nineteenth book in the beloved Foreigner space opera series begins a new era for human diplomat Bren Cameron, as he navigates the tenuous peace between human refugees and the alien atevi.

Bren Cameron, acting as the representative of the atevi's political leader, Tabini-aiji, as well as translator between humans and atevi, has undertaken a mission to the human enclave of Mospheira. Both his presence on the island and his absence from the continent have stirred old enemies to realize new opportunities.

The situation has strengthened the determination of power-seekers on both sides of the strait. Bren knows most of them very well, but not all of them well enough. The space station on which the world increasingly relies is desperate to get more supplies up to orbit and to get a critical oversupply of human refugees down to the world below. Rationing is in force on the station, but the overpopulation problem has to be solved quickly—and Bren's mission on Mospheira has expanded to include preparation for that landing.

First down will be the three children to whom Tabini's son has a close connection. But following them will be thousands of humans who have never set foot on a planet, humans descended from colonists and officers who split off from Mospheiran humans two hundred years before in a bitter parting of the ways. There is no way the atevi, native to the world, will cede any more land to these new arrivals: they will have to share the island. But certain Mospheirans are willing to use force to prevent these refugees from settling among them.

Bren's job is as general peacemaker—but old enemies want war. Is Bren's diplomatic acumen enough to prevent a war that both sides are prepared to wage?

SFWA Grand Master C.J. Cherryh has written more than seventy books, including the highly popular Foreigner science fiction series. She won the Hugo Award for her novels Downbelow Station and Cyteen, and her short story "Cassandra." She has also won the Campbell Award, Locus Award, and more.

This feature require that you enable JavaScript in your browser.
END_OF_DOCUMENT_TOKEN_TO_BE_REPLACED

This feature require that you enable JavaScript in your browser.
END_OF_DOCUMENT_TOKEN_TO_BE_REPLACED

This feature require that you enable JavaScript in your browser.
END_OF_DOCUMENT_TOKEN_TO_BE_REPLACED