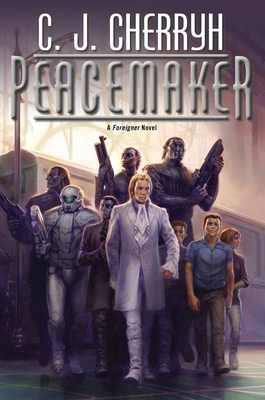 This is book number 15 in the Foreigner series.

The fifteenth novel in Cherryh’s Foreigner space opera series, a groundbreaking tale of first contact and its consequences…

Civil war on the world of the atevi is finally over. And Cajeiri, son and heir of Tabini-aiji, atevi leader of the dominant Western Association, is about to celebrate his fortunate ninth birthday. Bren Cameron, brilliant human diplomat allied with Tabini, has managed to arrange a visit for Cajeiri’s three special associates from the starship Phoenix—ordinary human children who developed a bond with Cajeiri during his two years in space.

After a year of political upheaval, this is a happy event: the heir is safe, the aiji is back in power, and a massive celebration is planned in the capital. The whole world is watching.

But Bren Cameron has received evidence that security has been severely compromised from the aiji’s high office on downward. The powerful Assassins’ Guild—which provides the judicial system, law enforcement, and personal protection in atevi society—is in the hands of a man who would like to turn the entire world back two centuries.

Bren now knows the details of a decades-old plot that’s been threaded through Guild actions since before his arrival on the continent. The enemy’s best chance is to strike now, at the public celebration that is much too important and far too advanced to cancel.

Bren and his associates have no choice. If they don’t make the first move, the other side will. And the lives of the heir, his innocent human guests, and the entire ruling family are at stake.

The long-running Foreigner series can also be enjoyed by more casual genre readers in sub-trilogy installments. Peacemaker is the 15th Foreigner novel, and the 3rd book in the fifth subtrilogy.

This feature require that you enable JavaScript in your browser.
END_OF_DOCUMENT_TOKEN_TO_BE_REPLACED

This feature require that you enable JavaScript in your browser.
END_OF_DOCUMENT_TOKEN_TO_BE_REPLACED

This feature require that you enable JavaScript in your browser.
END_OF_DOCUMENT_TOKEN_TO_BE_REPLACED