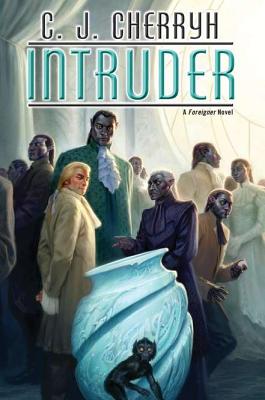 This is book number 13 in the Foreigner series.

The thirteenth novel in Cherryh’s Foreigner space opera series, a groundbreaking tale of first contact and its consequences…

Civil war on the world of the atevi is over but diplomatic disputes and political infighting continue unabated. Bren Cameron, brilliant human diplomat allied with the dominant Western Association, has just returned to the capital from his country home. But his sojourn was anything but restful, for Bren and his associates have had a small war of their own to contend with, ending with rebel leader, Machigi, joining the atevi congress representing the rebels as a member state.

Machigi, to Bren’s utter shock, has invoked an ancient law, changing Bren's role as negotiator for Tabini-aiji, Ilisidi, and other leaders of the Western Association to that of a specialized, entirely neutral negotiator between atevi adversaries. Tabini-aiji is enraged to have lost his personal negotiator, and Bren is becoming embroiled in a development that could result in his assassination.

But there are even more dangerous things afoot, as a crisis brews inside the immensely dangerous Assassins’ Guild. The recent dustup with the Shadow Guild may be only the beginning.

The long-running Foreigner series can also be enjoyed by more casual genre readers in sub-trilogy installments. Intruder is the 13th Foreigner novel, and the 1st book in the fifth subtrilogy.

This feature require that you enable JavaScript in your browser.
END_OF_DOCUMENT_TOKEN_TO_BE_REPLACED

This feature require that you enable JavaScript in your browser.
END_OF_DOCUMENT_TOKEN_TO_BE_REPLACED

This feature require that you enable JavaScript in your browser.
END_OF_DOCUMENT_TOKEN_TO_BE_REPLACED