The Astonishing Life of Octavian Nothing, Traitor to the Nation, Volume 1: The Pox Party (Compact Disc) 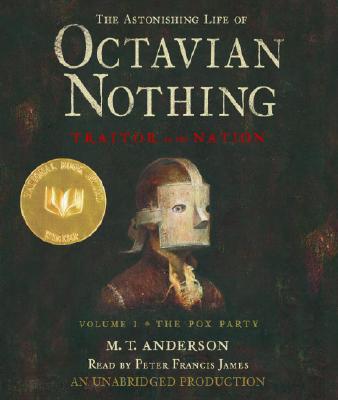 He is a boy dressed in silks and white wigs and given the best of classical educations. Raised by a mysterious group of rational philosophers known only by numbers, the boy and his mother–a princess in exile from a faraway land–are the only people in their household assigned names. As the boy’s regal mother, Cassiopeia, entertains the house scholars with her beauty and wit, young Octavian begins to question the purpose behind his guardians’ fanatical studies. Only after he dares to open a forbidden door does he learn the hideous nature of their experiments–and his own chilling role in them.

M. T. Anderson is on the faculty at Vermont College's MFA Program in Writing for Children. He is the author of the young adult novels "Thirsty" and "Burger Wuss." He says of "Feed," "To write this novel, I read a huge number of magazines like "Seventeen," "Maxim," and "Stuff." I listened to cell phone conversations in malls. Where else could you get lines like 'Dude, I think the truffle is totally undervalued'?" M. T. Anderson lives in Boston, Massachusetts.

This feature require that you enable JavaScript in your browser.
END_OF_DOCUMENT_TOKEN_TO_BE_REPLACED

This feature require that you enable JavaScript in your browser.
END_OF_DOCUMENT_TOKEN_TO_BE_REPLACED

This feature require that you enable JavaScript in your browser.
END_OF_DOCUMENT_TOKEN_TO_BE_REPLACED