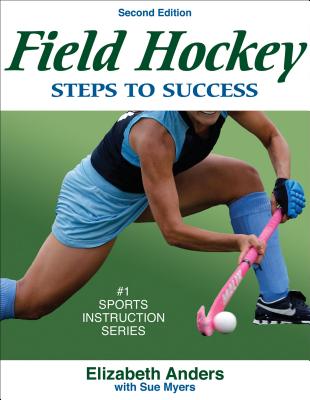 By Elizabeth Anders, Susan Myers
Email or call for price and availability
Out of Print

Master coach and field hockey legend Elizabeth Anders details the step-by-step program that will teach you how to develop these skills:

-Become a better goalkeeper through correct positioning and increased awareness in the net.

Whether you are new to the sport or seeking new techniques to add to your arsenal, Field Hockey: Steps to Success—part of the popular Steps to Success Series that has sold more than 1.5 million copies—will help you improve every aspect of your game.

Elizabeth R. Anders is a dominant figure in field hockey. Her accomplishments include being the winningest coach in college field hockey, leading her teams to nine NCAA National Championships, and serving as head coach of the U.S. national field hockey team for three periods: 1985, 1990-93, and 2003-04. During her 35 years as a field hockey player, Anders twice earned a spot on the U.S. women's Olympic field hockey team and is the current Olympic Games record holder in scoring, winning a bronze medal in 1984. She was inducted into the United States Field Hockey Association Hall of Fame in 1989.

Anders has coached and taught field hockey for over 30 years. She is currently the head field hockey coach at Old Dominion University in Norfolk, Virginia. Ten of her former players have earned spots on the U.S., Dutch, and Argentine Olympic teams, and five are currently on the national team. A frequent writer on the sport, Anders is the author of Lessons in Field Hockey, Fitness Training for Field Hockey, Summer Training for Field Hockey, and On the Rebound: The Hit. She resides in Virginia Beach, Virginia.

Sue Myers has 35 years of experience coaching and teaching field hockey internationally and nationally. She is currently an assistant field hockey coach at Old Dominion University. Sue was on the U.S. national team from 1972 to 1979 and played on the very first U.S. World Cup team in 1975. Myers was a player on and cofounder of the Red Rose Field Hockey Club based in southeastern Pennsylvania from 1975 to 1985. With the club, she won five national team championships coaching alongside Anders.

"Field Hockey: Steps to Success is the perfect guide for all players and coaches who want to improve in all aspects of the game and advance to the next level to become champions."

This feature require that you enable JavaScript in your browser.
END_OF_DOCUMENT_TOKEN_TO_BE_REPLACED

This feature require that you enable JavaScript in your browser.
END_OF_DOCUMENT_TOKEN_TO_BE_REPLACED

This feature require that you enable JavaScript in your browser.
END_OF_DOCUMENT_TOKEN_TO_BE_REPLACED