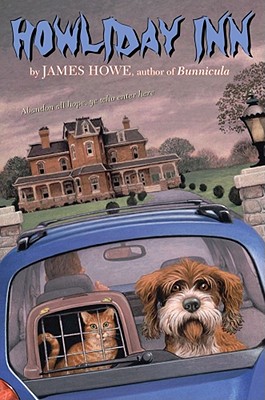 This is book number 1 in the Bunnicula and Friends series.

Harold and Chester could hardly believe it. The Monroe family was going on vacation without them. Bunnicula, the family rabbit, would be boarded with a neighbor. But they, the family's loyal dog and cat, were to be sent away with strangers; they were to spend a week at Chateau Bow-Wow.
Chateau Bow-Wow, observed Chester, soon after they arrived, could more properly be called Howliday Inn. Though what was howling, neither of them knew. Chester had his suspicions however; only a werewolf could make that chilling sound.

Lynn Munsinger has illustrated more than ninety books for children, many with her frequent collaborator Helen Lester. Lynn’s art has brought beloved characters like Wodney Wat, Tacky the penguin, Fluffy the porcupine, and Sparky the sloth and more to charming life. She lives in Vermont.

This feature require that you enable JavaScript in your browser.
END_OF_DOCUMENT_TOKEN_TO_BE_REPLACED

This feature require that you enable JavaScript in your browser.
END_OF_DOCUMENT_TOKEN_TO_BE_REPLACED

This feature require that you enable JavaScript in your browser.
END_OF_DOCUMENT_TOKEN_TO_BE_REPLACED