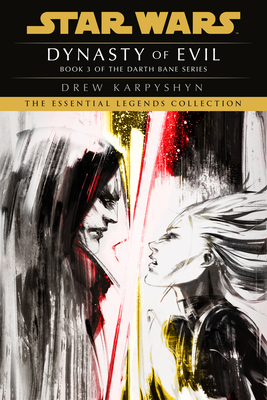 This is book number 3 in the Star Wars: Darth Bane Trilogy - Legends series.

The future of the dark side hangs in the balance in the stunning conclusion to the Darth Bane series.

Twenty years have passed since the Sith and their endless rivalries were eradicated and replaced with the Rule of Two. Darth Bane now reigns alongside his young acolyte, Zannah, who must study and train in the dark side of the Force until the time comes to strike down her master and claim the mantle for herself.

But Bane’s brutal new regime has one potential fatal flaw—how will their legacy continue if an apprentice fails to raise their blade in combat? The only solution must be for the Dark Lord of the Sith to rediscover a long-forgotten secret of the order—the key to immortality.

Bane’s doubt spurs his young apprentice into action, and Zannah vows to destroy her master at any cost. After he mysteriously vanishes, she tracks him across the galaxy to a desolate desert outpost, where the fate of the dark side will be forged by a final fight to the death.

Drew Karpyshyn is a fantasy and science fiction novelist and an award-winning writer/designer for the computer game company Bioware, where he was lead writer on the popular Star Wars: Knights of the Old Republic video game. He lives in Austin with his loving wife, Jen, and their cat.

This feature require that you enable JavaScript in your browser.
END_OF_DOCUMENT_TOKEN_TO_BE_REPLACED

This feature require that you enable JavaScript in your browser.
END_OF_DOCUMENT_TOKEN_TO_BE_REPLACED

This feature require that you enable JavaScript in your browser.
END_OF_DOCUMENT_TOKEN_TO_BE_REPLACED