Hell and Back: A Longmire Mystery (Hardcover) 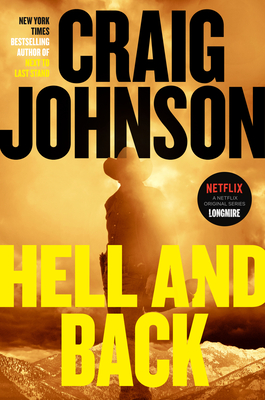 This is book number 18 in the A Longmire Mystery series.

What if you woke up lying in the middle of the street in the infamous town of Fort Pratt, Montana, where thirty young Native boys perished in a tragic 1896 boarding-school fire? What if every person you encountered in that endless night was dead? What if you were covered in blood and missing a bullet from the gun holstered on your hip? What if there was something out there in the yellowed skies, along with the deceased and the smell of ash and dust, something the Northern Cheyenne refer to as the Éveohtsé-heómėse, the Wandering Without, the Taker of Souls? What if the only way you know who you are is because your name is printed in the leather sweatband of your cowboy hat, and what if it says your name is Walt Longmire . . . but you don’t remember him?

In Hell and Back, the eighteenth installment of the Longmire series, author Craig Johnson takes the beloved sheriff to the very limits of his sanity to do battle with the most dangerous adversary he’s ever faced: himself.

Craig Johnson is the New York Times bestselling author of the Longmire mysteries, the basis for the hit Netflix original series Longmire. He is the recipient of the Western Writers of America Spur Award for fiction and the Mountain & Plains Independent Booksellers Association's Reading the West Book Award for fiction. His novella Spirit of Steamboat was the first One Book Wyoming selection. He lives in Ucross, Wyoming, population 25.

Praise for Hell and Back

"A mystical thriller that offers a wild ride through a thoroughly altered reality."
—Kirkus Reviews

". . . those happy to bend crime fiction in the direction of horror will find a smorgasbord of supernatural delights."
—Booklist

"This book will keep Longmire fans coming back for more."
—The Spokesman-Review

"Johnson has plumbed the past and formed a fascinating, compelling and mythic tale, taking Walt to the edge of his ability to survive. ‘Hell and Back’ is a riveting read."
—The Durango Herald

"Craig Johnson consistently, intelligently and with customary dry humor, melds literary fiction with western crime fiction… His breadth of knowledge and the meticulous attention to detail adhered to in crafting, rewriting, and polishing his novels and their sheer readability puts him among the great western writers like Wallace Stegner, Ivan Doig, Norman Maclean, and John McPhee… Hell and Back is a stand-out work."
—BookTrib

This feature require that you enable JavaScript in your browser.
END_OF_DOCUMENT_TOKEN_TO_BE_REPLACED

This feature require that you enable JavaScript in your browser.
END_OF_DOCUMENT_TOKEN_TO_BE_REPLACED

This feature require that you enable JavaScript in your browser.
END_OF_DOCUMENT_TOKEN_TO_BE_REPLACED