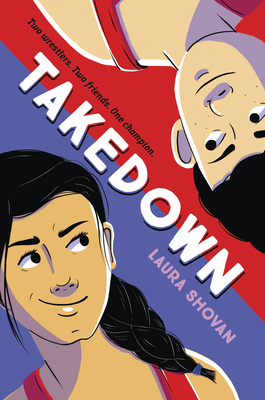 By Laura Shovan
$8.99
Email or call for price

Discover what happens when one girl wants to break barriers in a sport dominated by boys in this exciting and thoughtful novel by the author of The Last Fifth Grade of Emerson Elementary.

Mikayla is a wrestler; when you grow up in a house full of brothers who wrestle, it's inevitable. It's also a way to stay connected to her brothers and her dad. Some people object to having a girl on the team. But that's not stopping Mikayla. She's going to work hard, and win.

Mikayla and Lev push each other to excel, and become friends. But when they face each other, only one of them can win.

Laura Shovan's debut middle-grade novel, The Last Fifth Grade of Emerson Elementary, was a NCTE 2017 Notable Verse Novel and a Bank Street College of Education Best Children's Book of the Year, and won a Cybils Award for poetry, as well a Nerdy Book Club award. Her son's experiences as a member of a travel wrestling team were the inspiration for Takedown. Laura and her family live in Maryland, where she is a longtime poet-in-the-schools for the Maryland State Arts Council. Visit her online at laurashovan.com, or follow her on on Facebook (facebook.com/laura.shovan.poet/) and on Twitter at @LauraShovan.

“As the chapters alternate between the characters’ perspectives, readers will quickly become invested, particularly when the tweens’ goals eventually merge and they discover that a true wrestler is anyone with the courage to step on the mat.” —Booklist

“The characters are in their first year of middle school, which will appeal to both upper elementary and younger middle school audiences. . . . A solid choice.” —School Library Journal


Honors and Praise for The Last Fifth Grade of Emerson Elementary:

“This gently evocative study of change in all its glory and terror would make a terrific read-aloud or introduction to a poetry unit. A most impressive debut.” —School Library Journal

“Sure to inspire the poet in all of us, young and old.” —Mark Goldblatt, author of Twerp

This feature require that you enable JavaScript in your browser.
END_OF_DOCUMENT_TOKEN_TO_BE_REPLACED

This feature require that you enable JavaScript in your browser.
END_OF_DOCUMENT_TOKEN_TO_BE_REPLACED

This feature require that you enable JavaScript in your browser.
END_OF_DOCUMENT_TOKEN_TO_BE_REPLACED